2 1,400-HP Hoonicorn Is Coming Back Stronger, It's Ken Block vs the World

3 Dacia Duster Races Audi RS Q8 Up a Muddy Hill, the Winner Doesn’t Take It All

Dragos Chitulescu
We might just save the internal combustion engine. If someone will come up with a viable synthetic fuel solution, then maybe we won't have to switch the EVs. Several companies are working on this idea and the thought of still having non-electric supercars to play with in 20 years is certainly exciting.
11 photos

But in a way, it does feel like we should cherish the fast cars of today while we still can. Of course, there are several levels of fast, depending on how much you're willing to spend on such a vehicle. And today, we've got another supercar show-off on our hands, featuring a McLaren 765LT, a Ferrari F8 Tributo, and a Porsche 911 GT2 RS. Talk about a million-dollar challenge!

After warming up the tires, all three cars line up for the big event. At first, they're neck and neck, but soon after, the Ferrari gets left behind. The McLaren 765LT is upfront, while the GT2 RS is fighting to stay in 2nd place. The British-built supercar only needed 10.1 seconds to get across the finish line. The Porsche was 0.4 seconds slower, while the Ferrari came in third, just 0.1 seconds behind the GT2 RS.

The rolling race is up next, and they'll be starting from 50 mph (80 kph). This time, all three cars will be switched to their least sporty settings, with the gearbox also being set on automatic. The McLaren has the upper hand for this one, being the lightest car here. Surprisingly, it's the Porsche that has the best kick down, with the McLaren quite close behind. By the time they cross the 1/2 mile (804 meters) line, the GT2 RS and the 765LT are neck and neck.

It feels surprising to see the Ferrari left so far behind. Engaged in a wide-open-throttle battle, it doesn't take long for the race to come to an end, just after the 1-mile (1.6 km) finish line. The McLaren has a trap speed of 192 mph (309 kph) and wins this run as well, even though the Porsche had a better start. For the final run of the day, the cars are now in their sportiest modes, and drivers will be using the manual mode of the gearbox.

Once again, the F8 Tributo seems rather slow by comparison. The 765LT is faster than on the previous run as it gets ahead of the 911 GT2 RS before they cross the 1/2 mile line. The British supercar is seemingly undefeatable, and there's just one more test to go through before calling it a day: the braking test! Hitting the brakes at 100 mph (160 kph), the McLaren is the slowest car to a complete halt, while the Ferrari takes 2nd and the Porsche scores its only victory of the day. 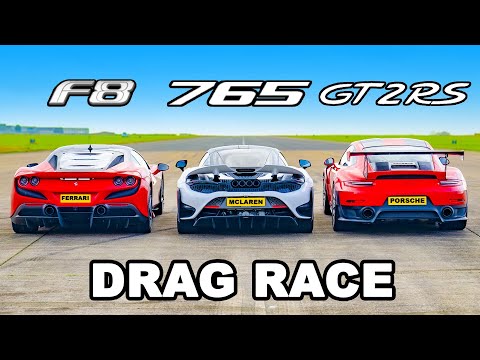