1 Installing Formula 1 Tires on a Normal Car Takes Work, This Is How It Was Done

3 2023 Mercedes-AMG One Hypercar Debuts With F1 Powertrain, DRS Mode, and No Porpoising

I used to think that I would love to be an F1 driver someday. I still do. But there are moments when you think of everything that entails. Fun parts aside, just think of the pressure. Think of the budget caps. Think of the constant danger. There's a reason why there are only 20 drivers on the grid. And there's an even better reason why only a handful of them manage to become champions. Only the most capable men can survive this sport.

F1 Drivers Are Set for the Azerbaijan GP, Anything Can Happen

And that's part of why it's so exciting to watch the races from the comfort of your home. You aren't going to wake up with Guenther Steiner or any other team manager yelling at you for doing something you weren't supposed to do.

You aren't going to deal with the pressure of not having a contract secured for the following year. Sure, you're only getting a glimpse of what Formula 1 is all about. But that might even prove to be too much for some people. We're all built differently.

One thing's for certain: Formula 1 has been a lot more exciting this year than it has in a long time. The $140 million budget cap is sending ripples throughout the paddock, and there are talks that some teams might even have to skip a few races to avoid going over it.

What's even more shocking to see is that Lewis Hamilton is nowhere near the top of the playing field. Ferrari fans are exhilarated to see their favorites doing well, with Charles Leclerc now in second place overall.

And by the looks of it, we have entered the Max Verstappen era. The 24-year-old Dutch driver won the title last year, and he's in the lead again! He has had his share of bad luck this year, by having two races ending prematurely.

But he did win four out of the other five races, with an additional third place secured in Monaco. One thing's for sure, Red Bull is on fire this year! With three P2 finishes and a victory in Monaco, Sergio Perez is right behind Leclerc, in third place!

Meanwhile, George Russell and Carlos Sainz aren't all that far behind, in fourth and fifth. The Azerbaijan GP marks the return of F1 to Baku and the 8th race of the year so far. Baku City Circuit is the third-longest one on the calendar, at 3.73 miles (6.003 km).

That's about 0.62 miles (1 km) shorter than Spa-Francorchamps, and just 561 feet (0.171 km) shorter than Jeddah Corniche. The street venue has been home to F1 races since 2016 when it hosted the European Grand Prix.

Nico Rosberg won that race for Mercedes, as he was almost 17 seconds faster than Sebastian Vettel in the Ferrari. Daniel Ricciardo took the win in 2017 and was followed by Lewis Hamilton, Valtteri Bottas, and Sergio Perez in 2018, 2019, and 2021. Except for Rosberg, all the other Azerbaijan GP winners are ready to race this weekend.

Reportedly, drivers have to change gears about 68 times during one lap, which sounds like quite a bit of work. In case you'd like to verify that information for yourself you can watch Leclerc's Pole lap from last year.

Alternatively, the guys over at Mercedes-AMG Petronas Formula One have just released a video of Jarno Opmeer doing a fast lap around Baku on a racing sim. Jarno happens to be the team's official F1 Esports driver, and not by chance. He is the reigning, 2020 and 2021 F1 Esports World Champion. Talk about being fast!

As usual, the event is set to start on Friday, the 10th of June. Drivers will have access to two practice sessions before a third one and qualifying on Saturday. The race is scheduled for Sunday, 11th of June, starting at 1 PM CEST (7 AM EST). 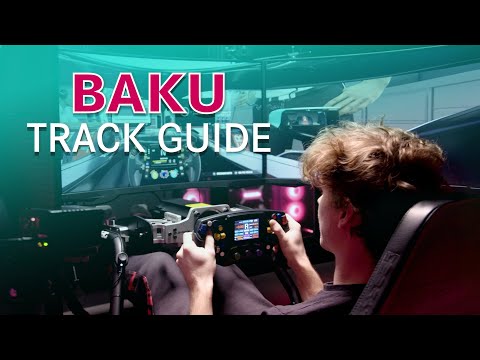