1 Rimac Nevera Is Faster, More Powerful Than Your Dream Car – And That Says It All

2 Rimac Nevera Driver Does 144 MPH During Public Event, Turns Himself In After

3 This Is What Drifting $2.4 Million in Almost Complete Silence Looks like

The only child of 1982 world champion Keke Rosberg, 2016 world champion Nico Rosberg is a huge fan of Rimac. The ex-F1 driver took an interest in the Croatian automaker during his tenure at Mercedes-AMG, and four years after his unexpected retirement from single-seater racing, the Formula E investor and entrepreneur purchased a Rimac C_Two.
64 photos

Sick of waiting for the Mercedes-AMG ONE to finish development, Nico decided to spend his money on the all-electric hypercar from Sveta Nedelja for obvious reasons. Unveiled at the 2018 Geneva Motor Show and subsequently renamed Nevera, this fellow is the fast-accelerating car in the world thanks to a time of 1.85 seconds to 60 mph (96 kilometers per hour).

Rimac also quotes a top speed of 258 miles per hour (415 kph), which is a little better than the 250-plus miles per hour (402 kph) promised by Tesla for the all-new Roadster. Oh, and by the way, the insanity of the Nevera also includes a quarter-mile sprint of 8.6 seconds on street-going rubber shoes.

The production version of the C_Two isn’t exactly cheap at €2 million ($2.4 million at current exchange rates), but it’s definitely worth every cent because of the Bugatti Chiron-shaming acceleration figures. The secret to this crazy performance comes in the guise of a quad-motor drivetrain rated at 1,914 ponies and 2,360 Nm (1,740 pound-feet) of tire-shredding torque.

It’s easy to understand why Nico voted with his wallet in favor of Rimac instead of the Stuttgart-based automaker that helped him secure the 2016 title, but the Nevera isn’t only a strip-slaying machine. You can also drive it for up to 340 miles (550 kilometers) under the Worldwide Harmonized Light Vehicle Test Procedure (WLTP), which is better than a Nissan Leaf with the bigger lithium-ion battery pack and the Tesla Model 3 Standard Range Plus.

All told, Rimac will produce 150 units of the record-smashing Nevera. 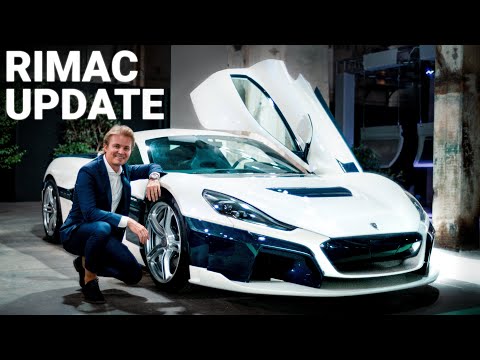