2 Nico Hulkenberg Makes His Return to Formula 1, Guess Which Team He 'Haas' Chosen

3 Instead of Just Paying Fines, Why Not Make F1 Teams Do Good for Other Racers?

Dragos Chitulescu
The 2022 F1 season has recently concluded in Abu Dhabi, revealing the final driver and constructor standings. While this was the last Grand Prix event for this year, there are plenty of news and updates coming up during the off-season. Some people may be leaving the sport, temporarily or for good, while others are joining in on the action. Either way, it will be interesting to see how all this information will affect the 2023 season.
21 photos

While some drivers have expressed their concern regarding the increasing number of races during a season, F1 is set to take on a record-breaking 24 GPs for 2023. That means more fatigue, stress, and time spent away from home for drivers and teams.

But it should make things even more exciting for spectators watching from all over the world. As we've been accustomed to, events will take place either on dedicated race tracks or temporary street ones. Right now, there are more circuits on the calendar than there are street venues, but the ratio seems to be changing every few years.

Max Verstappen has recently expressed his dissatisfaction with this trend, noting that "Street circuits are fun for pictures, but not for racing." The 2023 season is set to kick off in Bahrain with a pre-season testing session in February and then the first GP of the year in March.

Just two weeks after racing at the Bahrain International Circuit, drivers will have to go up against each other in Saudi Arabia. And this time they're looking at the Jeddah Corniche Circuit, which happens to be a street layout.

This will be the third Saudi Arabian Grand Prix in the history of F1, as the first one took place in 2021. Lewis Hamilton won that inaugural race, while Max Verstappen claimed top honors for 2022. It's one of the most challenging tracks on the calendar, with 27 corners and a length of 3.836 miles (6.174 km). A total of six drivers retired from this year's GP as further proof of that. Hamilton still holds the lap record since 2021, when he stopped the watch at 1:30.734. The track has had some changes done to it for 2022, to increase driver safety.

Additional updates have also been announced ahead of the 2023 edition. The race promoter has announced that these modifications will improve several aspects of the GP, with a focus on safety and excitement. Special Rumble lines that are meant to slow cars down have been added to turns 3, 14, 19, 20, and 21. Beveled curbs have replaced the old steel ones at turns 4, 8, 10, 11, 17, and 23. Of course, F1, FIA, and driver input have been crucial in determining these changes.

Improving driver sightlines has been one of the goals of this operation as well, so the fence wall has been adjusted at turns 8, 10, 14, and 20. The S-section between 22 and 23 has been altered as well, and it seems that drivers will be slower through it by about 31 mph (50 kph) once they get there.

The Jeddah Corniche Circuit complex also continues to expand, with more facilities for spectators in the years to come. We'll leave you with an onboard video of a virtual lap at this venue, so that you can get a preview of what's coming up a few months from now. With all the updates, it's hard to think that the 2021 lap record will be broken any time soon, if ever again. 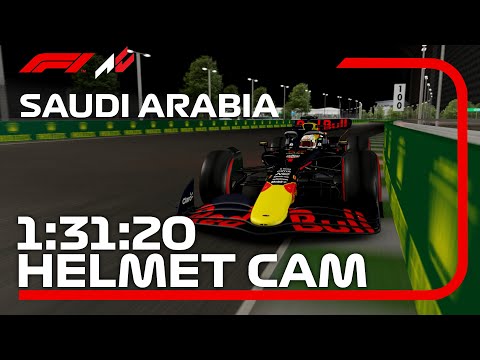 A number of track changes have been carried ahead of the 2023 edition of the Saudi Arabian Grand Prix ????#SaudiArabianGP #F1https://t.co/SRC5fL2h9C