We've developed a mild fetish for watching this Russian mechanic explain how he fixes these wrecks. And there's nothing more enjoyable than a prized BMW being taken from $1,000 scrap to $10,000 poser. Because at the end of the day, that's what an old 7 Series is good for - showing off.
3 photos

The problem with flagship sedan is that they always cost a lot of money to buy when new, after which their value drops like a stone. But if you've always wanted a W222 S-Class or a G01 7 Series, now could be the time.

Due to the economy being bad at the moment, the Russians are going one better by rescuing wrecks that would otherwise be destined for the breakers' yards. It's really a form of upcycling if you think about it.

The damage to this car is what you'd call "horrific." It's clearly been T-boned by something, though we're not exactly sure what. The intrusion into the cabin on the left side is so deep that the roof buckled. And obviously, many more panel has been damaged. If we remember correctly, the IIHS didn't like this generation of the 7er.

But we've seen this mechanic turn two halves of a 7 Series into one car, so this should be no problem for him.

He starts by removing all the damaged parts off the car. After that, he uses a winch to pull the bent roof back into original position. It takes quite a few tries. Off comes the old roof skin, replaced by a new one. The fenders and some of the outer skin of the side frame is also substituted. The 750i's engine also needs to be pulled out so that the geometry of the front structure can be fixed.

We've gotten used to repairing cars by just replacing broken. However, body repair remains a black art. We still wouldn't drive a V8-powered BMW where the roof pillars have been chopped and welded back in place. But what do we know? 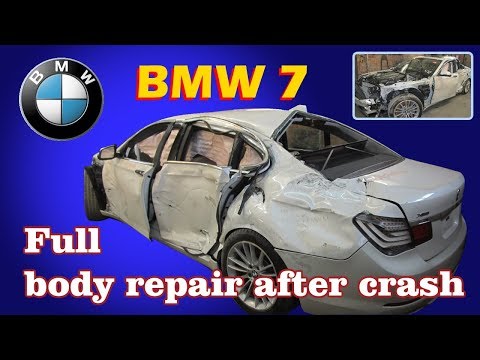