1 Raptors Line Up Behind Hercules, Air Above Them Seems to Boil in Anticipation

2 F-22 Raptor Is a Misty Blur of Metal, Air Stands No Chance

4 Here's a C-5M Super Galaxy Giving Birth to a CH-47F Chinook, There Were Two in There

F-16D Fighting Falcon Flies on Its Side, Edwards AFB Can Be Seen Far Below

Aviators have many traditions, including something called fini-flight. That’s sort of short for the final flight of a pilot or flight crewmember either with a certain military unit, or of their career. The pic you see here, released this month and showing a flight from late July, shows a glimpse of that tradition.
13 photos

What you’re looking at is an F-16D, the variant of the Fighting Falcon introduced in 1984. Flying it is Maj. Stephen Jude of the 416th Flight Test Squadron on his last outing inside the cockpit during his fini-flight in July.

According to the U.S. Air Force (USAF), down below, we can see some of the structures of the Edwards Air Force Base, looking particularly tiny from the undisclosed altitude the plane is flying at, yet perfectly visible thanks to the fact the Falcon is flying on its side.

The origins of the fini-flight tradition are somewhat of a blur. The USAF itself claims it dates all the way back to the years of the Second World War, while others claim its first documented appearance dates to the days of the Vietnam war, when someone celebrated 100 missions in the air in a certain way.

The tradition involves not only the flight itself, but also something called a water salute. After landing, the plane is sprayed with water from firetrucks located to either side of the runway, while the pilot gets his or her share of wetness by means of water and champagne.

Sadly, this time we only get to see this image of the Fighting Falcon, skillfully handled by its pilot over Edwards, and not the ground display of joy and celebration. For a better understanding of what a fini-flight is, we’ve attached below a video from 2014 showing this special moment for the first female fighter pilot to conduct a fini-flight, Colonel Jeannie M. Leavitt. 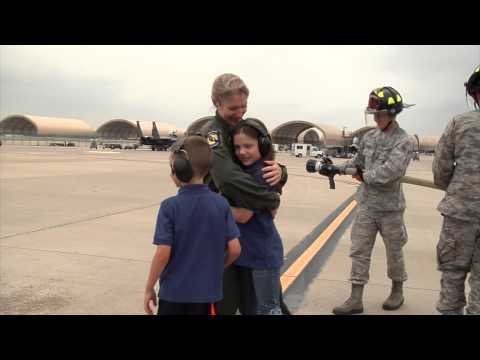