5 Check Out an SLS AMG Black Series Get Swarmed by a Bunch of Car Spotters
Car video reviews:
Up Next

The Future Is Weird, According to the Winners of 2016 Michelin Challenge Design

Eye Candy Alert: Are these Luxury Cars Worth $1 Million Abandoned?

The Disneyland Resort in Anaheim, California was opened in 1955. It’s the only theme park designed and built under the direct supervision of Walt Disney. In the same nuance, if there would be a similar resort hosting supercars instead of Disney characters out there, this parking place in Paris should be it. One of Europe’s car spotters recently visited the place and here's what he got.
1 photo
Walt Disney probably was a toy genius, a visionary of the time in terms of entertainment, but this place is nothing but one of Europe’s famous underground parking places. How is it special, you ask? Well, for starters Etoile-Foch is the largest car park in Paris. It has 2300 spaces under avenue Foch, from the place de l’Etoile through the avenue Raymond Poincare. You may not have heard of these streets, but you surely know of the "Arc de Triomphe." Well, it’s right next to it.

Put it this way, it has 11 pedestrian entrances and the distance between its two receptions is more than 400 meters (1312 feet). Considering its size and location, it’s safe to assume this parking place is filled with the most expensive cars in Paris. After all, driving in France’s capital city is slowly becoming a luxurious habit, especially when if you’re willing to drive through the city’s center.

The car-mad, auto spotter claims he found luxury cars worth a total of one million dollars. We’re talking about two Maserati Quattroporte, Lamborghini Gallardo, Ferrari 550 Barchetta, Mercedes-Benz SL 55 AMG and Bentley Continental GT among many others. Maybe they all sum up to more than that, but we can’t agree with the fellow’s theory, claiming these rides are abandoned.

Not that we’re traveling to Paris that often, but as far as we can remember this parking place is one where eccentric auto owners leave their vehicles for extended periods of time. Since it’s also quite a dusty area, the elegant lines of these sportscars often fade, but that doesn’t mean they are abandoned. Still, the video is worth watching for the petrolhead pleasure it offers. 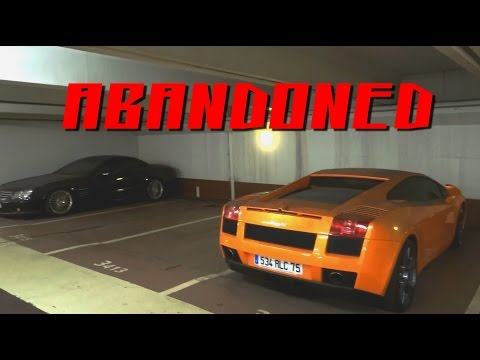