2 This Smart Robot Doubles as a Surveillance Camera on Wheels

5 Proteus Is World’s Largest Underwater Lab and Habitat, the ISS of the Sea
Car video reviews:
Up Next

Remotely operated underwater vehicles (ROVs) are trying to keep up with technology, and they’re indeed becoming more and more sophisticated and feature-rich. But there is still room for improvement in how we control them, and this drone developed by a Swiss startup is definitely a game-changer. Hydromea recently announced the world’s first wireless portable underwater drone, and it's called the ExRay.
5 photos

ROVs currently have to use cables to be controlled underwater, as radio waves communication through water is not a good option. But the fact that these vehicles are tethered is inconvenient, as these cables are in many cases long and heavy. Some ROVs even depend on these cables for power.

There are many drawbacks to this technology. First, you need a large vessel to handle such weights. Then you have to expect that cable to get tangled and even caught in various underwater objects, which may even result in you losing the vehicle.

The Hydromea ExRay puts an end to all of the above because it eliminates the cable from the equation. Instead, this wireless ROV uses the company’s proprietary optical communication technology called LUMA. The system is basically a modem that uses rapid pulses of 470-nanometer LED light to transmit binary data (at 10 megabits per second) through the water, as explained by Hydromea, via New Atlas.

The ExRay drone offers full HD video with no lag and has a communication range of 50 meters (164 feet). That range gets smaller in areas with bright ambient light. However, this is just a prototype, and Hydromea is working on doubling that range.

The drone has a hubless design and comes equipped with seven ultra-slim thrusters. It weighs 7 kg (15 lbs) and is 70 cm (27.5 inches) long. It has a battery life of up to eight hours.

Hydromea doesn’t offer any details on the price or release date of the ExRay, but we know that it’s going to be ready for production sometime by the end of 2022. 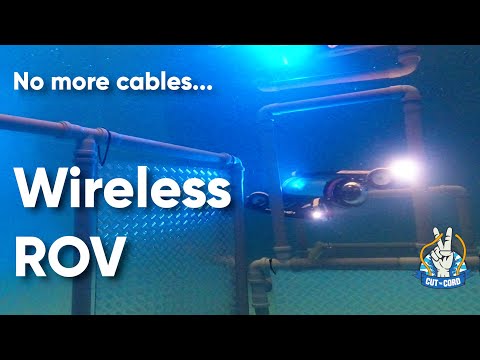