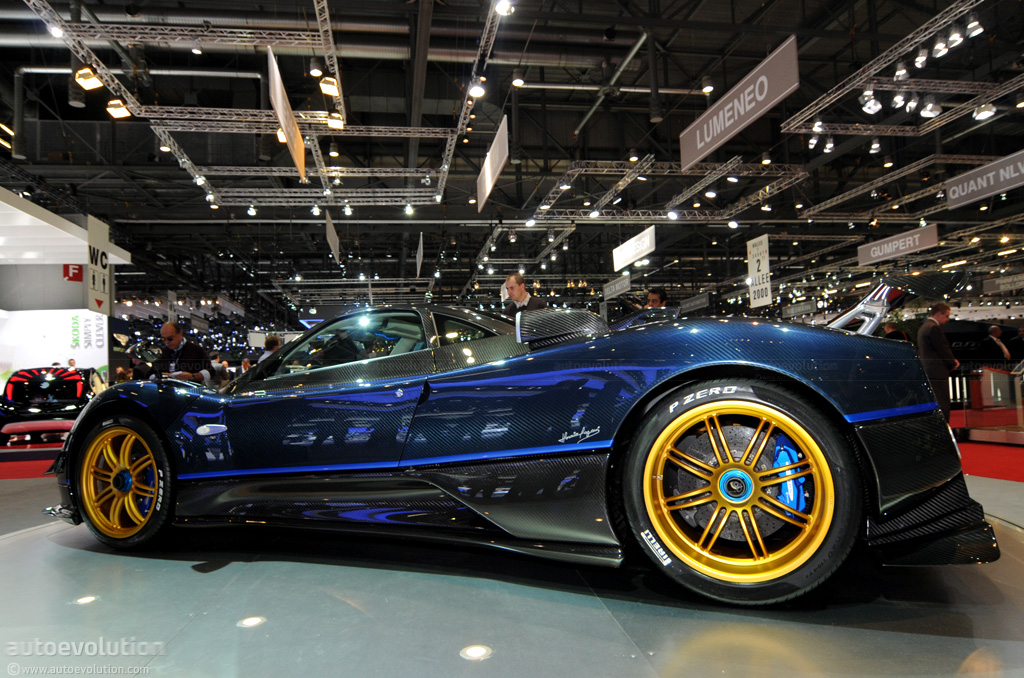 An Argentinean dreamer that emigrated to Italy in his youth, Horacio Pagani is now being regarded as one of the last remaining old-school builders of supercars. After spending some time in and around the Modena region, where all the Italian magic happens (read: where Ferrari and Lamborghini manufacture their cars), Pagani had a brief stint doing low-level jobs for Lamborghini, despite the lack of encouragement he had gotten from the famous engineer Giulio Alfieri.

There he ended up designing the molds and making the body parts for the Countach Evoluzione and the Countach 25th Anniversary model. His lifelong dream had always been to create the most beautiful cars in the world by himself, so he had to start his own car-making company some day.

With the money saved up he bought Italy's fifth industrial autoclave in 1988, using it for molding carbon fiber car parts. This helped him to again get a consulting job at Lamborghini, paving the way for its future automotive credentials. The Pagani Automobili S.p.a. was founded in 1992, in San Cesario sul Panaro, which... drumroll... is also near Modena, transforming the area into a triumvirate of Italian supercar makers.

Since Horacio was also a close friend of fellow Argentine and multiple Formula 1 champion Juan Manual Fangio, he wanted his first car to be named Fangio F1 as a compliment to the great driver. This led to Fangio himself accepting the honor, but only after asking Pagani to only use Mercedes-Benz engines in his future cars, since the ex-Formula 1 driver had a special relationship and close ties with the manufacturer.

Sadly, after Fangio died in 1995, Horacio decided against naming the car after him out of respect, but the cars did went on to feature only hand-built Mercedes-Benz V12 engines. This is how the Zonda and all of its following versions were born. From pure, unadulterated passion. 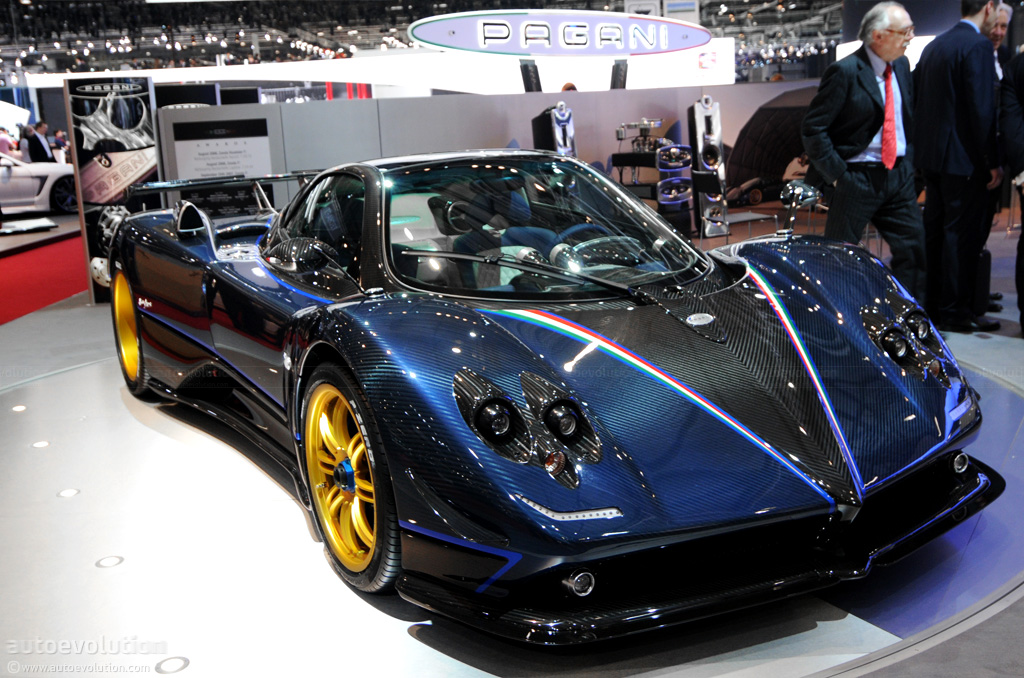 We caught up with the man, or we should probably say legend, at the Pagani stand from the 2010 Geneva Auto Show, where we managed to talk to him for a few minutes. This is how it all went.

Just a few minutes before the actual talk/interview, I was just sitting there, waiting, while my heart was pounding with emotion and astonishment as I was in the presence of no less than four automotive legends in the Pagani stand: just a few feet away from me there was a Zonda Cinque Roadster (one of five), a Zonda Tricolore (one of three) and Horacio Pagani himself having a friendly talk with none other than Valentino Balboni, Lamborghini's legendary ex-test driver.

After the two men said goodbye to each other, I quickly snatched an autograph from Mr. Balboni only to be then invited by Horacio in the stand's private area. Just after we began to talk, we were again abruptly interrupted by a flamboyant display of affection from what I get was another Lamborghini employee visiting the Pagani stand. Mr. Pagani doesn't forget old colleagues that easily, apparently. 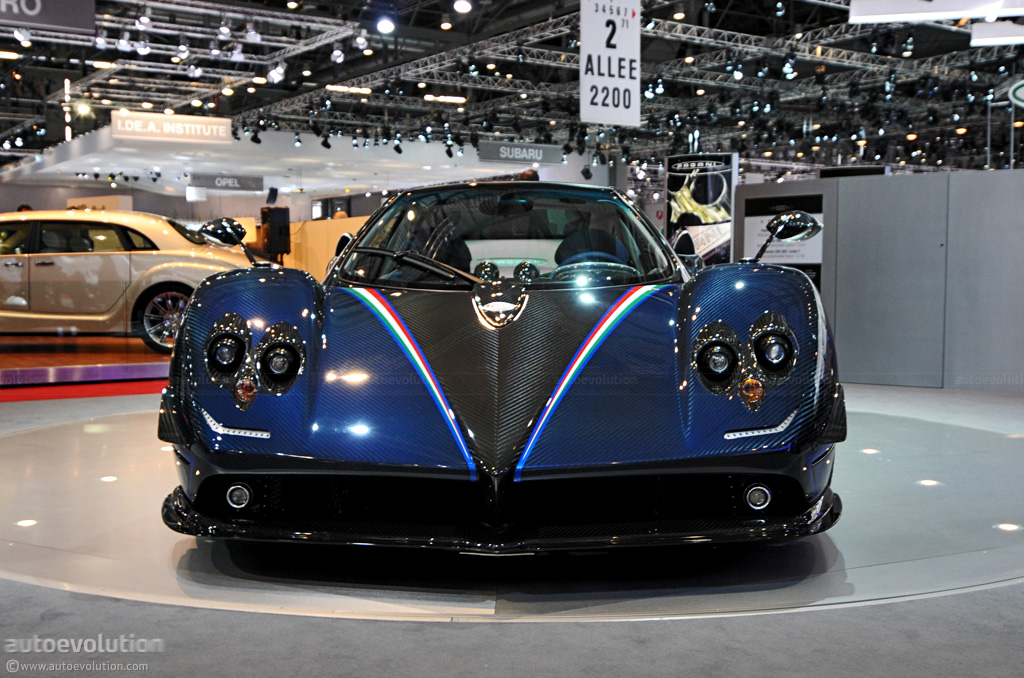 Alex Oagana: You're probably getting this all the time, but I'll shoot anyway. Do you think that Pagani, as an exclusive supercar brand, is in a niche of its own or does it compete with the "regulars" found at these performance and price levels? More specific, given your previous work, would you say that the Zonda goes against cars like the high end models from Ferrari and Lamborghini - such as the Enzo and the Murcielago LP 670-4 SV – or maybe Koenigsegg, or does it have its own market and clients?

Horacio Pagani: I believe that there's a market for everyone. The only other car that has a similar clients target as the Zonda is probably the Bugatti Veyron – you know, as far as price and collectibility go. But most of Pagani customers are big car collectors, and some of our clients have both a Zonda and a Veyron in their garage. Since the cars are very different from one another and each has its own strong identity they can't be considered as true competitors, but they are sold to similar customers.

Alex Oagana: Do you think you can tell me something about the C9 project (the upcoming Zonda replacement model, ed), or is it too early to disclose any secret details about it?
(this was my failed attempt at making him smile after I sensed that I somewhat angered him by bringing Koenigsegg in a discussion about Zondas competitors) 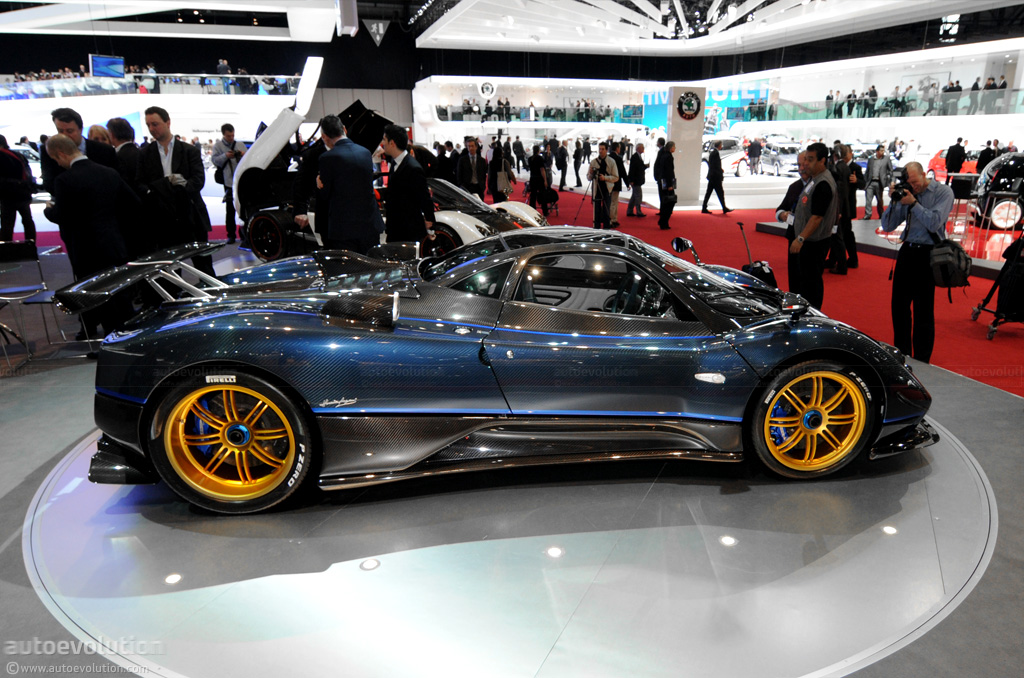 Horacio Pagani: No, it's fine. I can tell you that the C9 is a completely new car, designed from the ground up, so it doesn't share anything in common with the Zonda. We have started work on this project since as early as 2003 and the final production version will be released at the end of this year. Naturally, we hope it will have at a similar success as the Pagani Zonda.

Alex Oagana: I'm guessing the engine will also be supplied by Mercedes-AMG, to keep the tradition going...

Horacio Pagani: Yes, the engine is also completely new, created by AMG for us.

Alex Oagana: There was some speculation that the C9 will feature a twin-turbo V8 from AMG instead of another version of the old normally-aspirated V12.

Horacio Pagani: No, no, not a chance. The powerplant is a completely new V12 specially created for our car.

Alex Oagana: I see. What about the transmission? Do you plan on switching to a more modern sequential transmission, for example a twin-clutch? I'm only asking because this seems to be the current trend...

Horacio Pagani: Umm, not really, no. As a matter of fact we tested a number of types of transmissions for the new car, including a dual-clutch one, and we decided to go for a single-clutch. We found the dual-clutch gearbox to add about 70 kilograms in an area of the car that would destabilize the weight distribution we envisioned, and we would also need a new undercarriage aerodynamics package for it. So, the C9 will have a completely new [sequential] transmission, but with a single clutch. 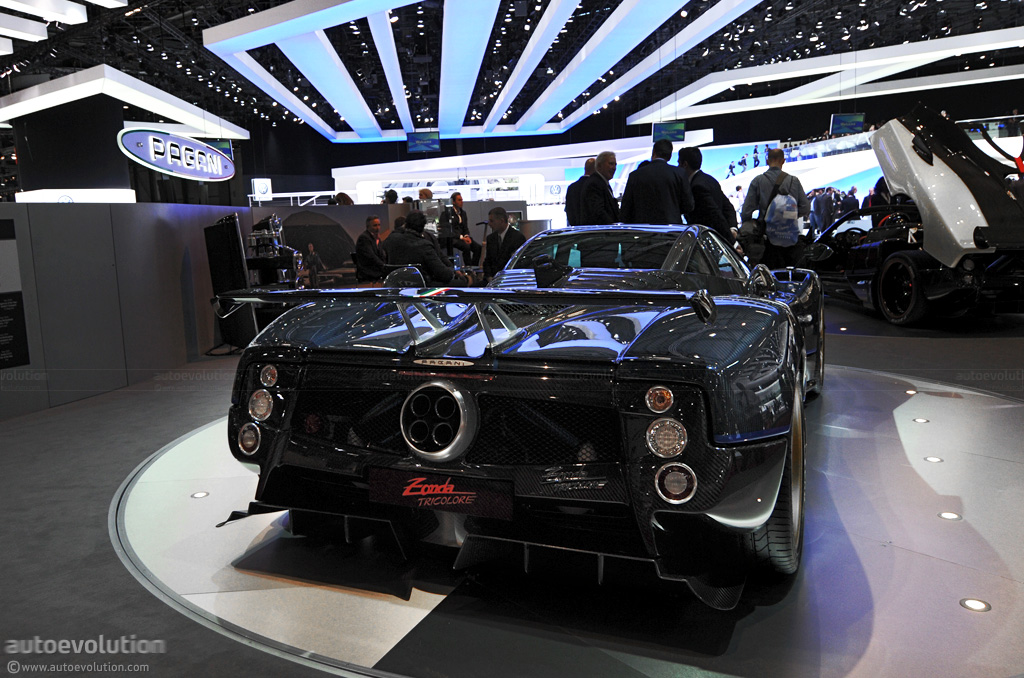 Alex Oagana: Does the new car have a name yet?

Horacio Pagani: No, not yet.

Alex Oagana: But it will have one, it won't just be the Pagani C9, right? Because that would sound a bit impersonal...

(he smiles, for the first time) Horacio Pagani: Of course, but we can't say it yet. I can only tell you that it will also have an appropriate meaning. (Zonda is a type of wind from the Argentinean Andes mountains, ed)

Alex Oagana: Given the recent car shows' green themes – the 2010 Geneva Auto Show even has a designated "green hall" – and the general public's view on CO2 reduction, do you take this into account when thinking about the future of the Pagani brand?

Horacio Pagani: You see, the Zonda already has a fuel consumption that's similar to, let's say a Mercedes-Benz E-Klasse, because it weighs so much less than a regular car. Also, another one of our core trademarks is the car's exhaust sound, and the only way to keep the C9 project car realistic in the eyes of customers would be to preserve that [trademark] by putting an internal combustion engine in it, and not an electrical one. We already started with a very light car, so I don't think that the new model will have that much of a problem in delivering a good fuel consumption, especially when thinking about the performance levels it provides. 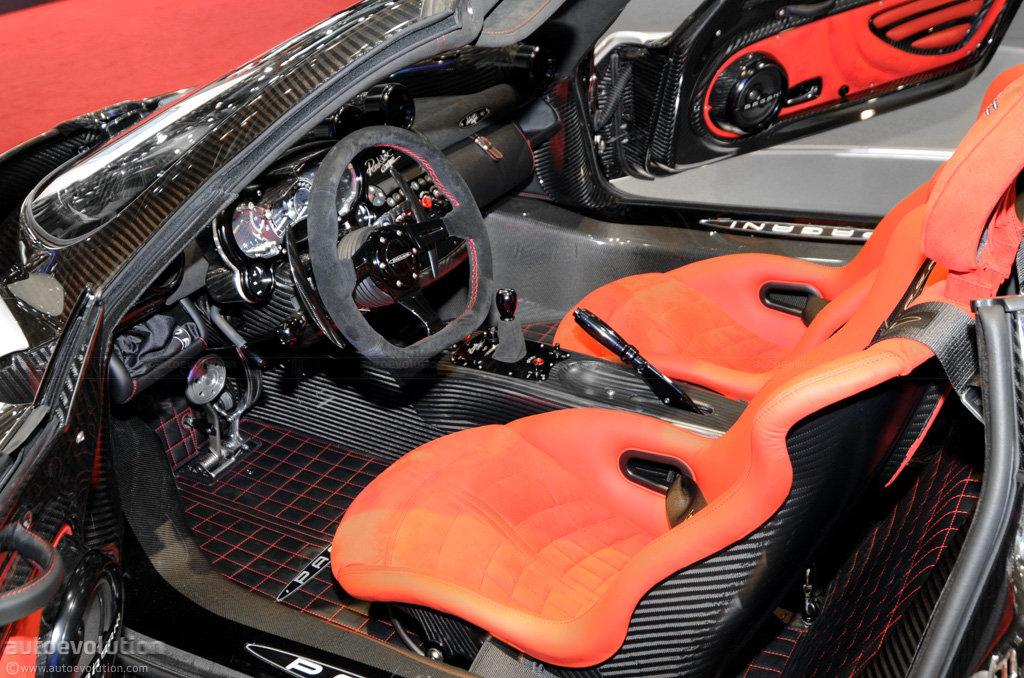 Alex Oagana: Speaking of sounds, as you said so yourself just now, Zondas are known to have a very distinct engine sound. Is there any special modification made for the car's exhaust, to make it sound a certain way, or is that just a consequence of the performance tuning?

Horacio Pagani: It's more of a direct consequence, because the sound goes hand in hand with the performance level. We always envision a car as a complete package, so we would never go for a nice sound in the detriment of performance, or vice-versa.

Alex Oagana: Getting back to the C9 subject, will it have other versions, like the Zonda has? Is there a coupe, a roadster, a (more) high performance, extreme version already in the works?

Horacio Pagani: The first one to arrive will be the coupe variant, while the roadster will not come earlier than two years from now. It's launch will be in 2012, at the latest.

Alex Oagana: For the final question I would like to ask you about the direction where the Pagani supercar brand is heading in the future. From the way things are currently going from both the economic and environmental points of view, where do you see your company in, let's say, 10-15 years?

Horacio Pagani: We are working every day from morning till dusk to find new ideas, so we'll find a way to survive for the next 10-15 years. The worst thing that can happen is that we'll have to start making bicycles. (he laughs)

Now those would probably be the coolest bikes in the world...