2 2021 Ford Bronco Gets Doug DeMuro’s Thumbs Up, Cheap Plastic Trim Lets It Down

Except for the Quality Issues, the Tesla Model S Plaid Has Doug DeMuro's Approval

Home > News > Car Profile
Mircea Panait
It’s easy to slip into fanboyism with the Model S Plaid, the hardest-accelerating Tesla of them all. But when you think about it, all the hyperbole is justified considering that very few vehicles can match it over the 1/4-mile. One of those vehicles is the Rimac Nevera, although it’s hardly series production due to a limited run of just 150 examples.
7 photos

After testing the Ford Bronco, which is arguably the most hyped utility vehicle of the year, Doug DeMuro has now taken the wheel of a Model S Plaid. Or better said, the yoke because Tesla doesn’t like to blend in with the crowd. Another quirk of the fully-electric luxury sedan is the gear selector, which features two interfaces. Both are rather counterintuitive in my book.

One way the driver can switch from drive to reserve is to swipe up or down on the driver side of the touchscreen. The other interface comes in the guise of touch controls on the center console, just under the wireless charging pad.

The quirky stuff doesn’t end here because the Palo Alto-based automaker doesn’t include stocks. Your turn signals, windshield washer and wipers, high beams, horn, and so forth are controlled from the front of the yoke, where you’ll find a few touch-sensitive buttons that are easy to press by accident when you’re doing a three-point maneuver while parallel parking. The learning curve, therefore, is steeper than in any other car except for the Model X that mirrors the dashboard layout and design of the redesigned S.

Doug is particularly excited by the infotainment screen, which can be used for playing video games, drawing stuff, browsing the Internet, and many other whatnots that aren’t relevant to the act of driving or being chauffeured. Rear passengers also have a touchscreen of their own, and they can very well spend the journey ignoring the peeps up front by watching Netflix or Hulu.

“I have to call out this car for pretty bad quality,” said DeMuro, “especially on the outside. The owner of this car, who has several different cars, told me that this is the worst car he has seen in terms of paint quality.” The chips on the driver-side mirror’s arm beggar belief, and that’s how the Model S Plaid came from the factory. Not long ago, we covered a detailing video of a Model S Plaid with quality issues that further include atrocious panel gaps on the inside of the C-pillars, a gap under the passenger headlight, marring on the gloss-black trim, hazy and scratched taillights, and so forth.

But still, DeMuro can’t help but love the most performance-oriented Tesla of them all. The way this car accelerates is worth the price alone, and to whom it may concern, $129,990 is the starting price for the Model S Plaid. 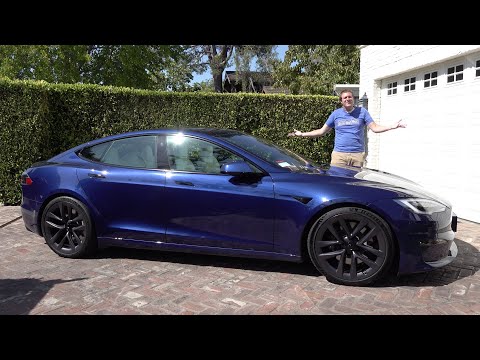