The Daytona 500 NASCAR Cup Series race is already waiting for the 2022 lineup after an action-packed (and nerve-crunching) result that saw two major wrecks and a surprising win by Michael McDowell (his first in the Cup Series). But the venue isn’t exactly devoid of interesting happenings outside of the traditional event.
31 photos

We have seen strange occurrences on the Daytona tarmac before. For example, last year, Donald Trump’s limousine The Beast was there as the former president served as grand marshal, while some years ago, even Captain America made an appearance. But this time around, things are made interesting with a little help from two very uninteresting cars, a Chevrolet Malibu and a Ford Fusion.

If anyone remembers, back in the day, NASCAR drivers used to fetch their cars from the showroom and enter them into competitions with very few modifications. Today, that’s far from the same as stock car racing features vehicles that have virtually nothing in common with their production counterparts.

Well, thanks to a segment coming from the NASCAR on Fox channel on YouTube, we get the chance to see a couple of the series’ former racing glories attempt to put back the “stock” in the “National Association for Stock Car Auto Racing.” With the help of rentals.

Both Jeff Gordon and Clint Bowyer are currently announcers and commentators for the Fox television network, but they haven’t forgotten they are skilled NASCAR drivers either. So, in a publicity stunt that clearly had the makings of great entertainment, they decided to have a friendly race for good old times sake while on their way to the Fox booth.

Gordon went for the Chevrolet Malibu while Bowyer was left with the Ford Fusion. For once, we think the caption with the disclaimer is probably just as fun as what's happening on screen. You’ll see it in the following video, but in case it escapes scrutiny, here it is for the sake of some innocent amusement: “(Retired) professional drivers on a (mostly) closed road course. Do not attempt at home... or anywhere for that matter.”

Do we need to tell you their former rivalry got the better of them, and we had a race full of (mostly funny) incidents (some PITs included)? And does it really matter that we came out of it without even knowing who actually won? 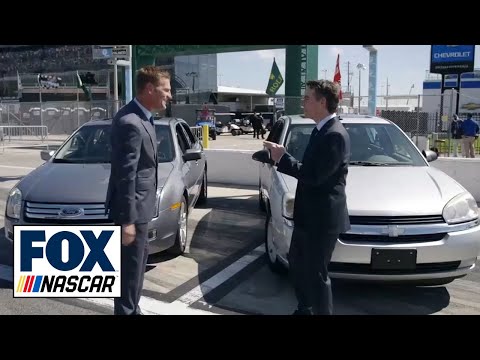