5 Here Are the Secrets Behind McLaren Speedtail’s Epic 1,035-HP Hybrid Powertrain
Car video reviews:
Up Next

Ever Wanted to Witness the Delivery of a McLaren 765LT? Granted, a "Cheap" One

Taking delivery of a new car is always an exciting moment for the new owner, no matter how high the price was. When said vehicle is a $380,000 McLaren super sports car, however, it becomes an event worthy of everyone's attention.
7 photos

Wait a minute, didn't the title say "cheap"? What kind of a millionaire writing this calls a nearly $400,000 ride "cheap?" Well, it's all a matter of context, and if you watch the clip, you'll realize that this Napier Green 765LT is actually very close to the low end of the model's pricing range.

In fact, Brooks Weisblat, the McLaren's owner, admits he didn't want to add any options at first but felt kind of obliged to pick two of them in the end. Those are the gorgeous color, enhanced even further by the aftermarket treatment applied (protective film and ceramic coating), and the contrasting stitching in the cabin.

Special colors going for the price of a new small car is nothing new with luxury models, but let's talk a little about the green stitching on the seats, dashboard, and door panels. That thing costs $5,756. But you have to pay it, right? Otherwise, they won't stitch your fabric, and it'll fall off. Oh, they still do it, they just use a different wire? Wow, that green one must be really expensive, then.

Exotic car manufacturers have been getting away with these things for ages, and even though the owners themselves must realize how ridiculous these prices are, everything is forgotten in the excitement of seeing and driving the new car for the first time.

Given Brooks' garage - a Ford GT40, a Ferrari F8 Tributo, a McLaren 720S, and a Lamborghini Huracan EVO RWD - not to mention all the cars he's owned over time, it would be understandable if his enthusiasm when picking up a new car was somewhat lower. But it's not, and just to make things even crazier, he also has Tim - a.k.a. Shmee150 - to keep him company throughout the process.

Oh, and just in case you're not convinced about the "cheap" part, wait until Brooks' 765LT is taken out of the workshop to meet its two siblings parked outside. Between the two of them, you have just short of one million dollars sitting out there, meaning an average of nearly $500,000. 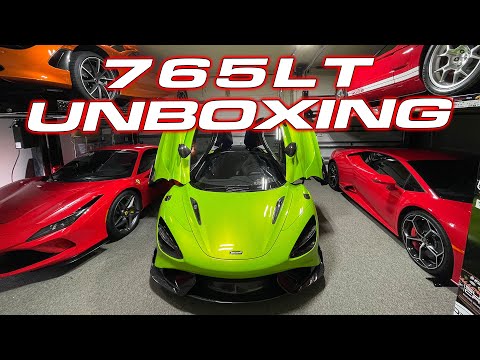