Ever Seen a BMW X1 on Such Big Wheels? Brash Crossover Has That Optional Seatbelt Pack

Never we would have imagined that we’d see a BMW X1 on oversized wheels in 2022, but here we are, ready to put the spotlight on such an example that doesn’t really deserve to enjoy its 15 minutes of fame.
10 photos

According to the owner, he has seen numerous X5 and X6 crossovers sporting similar mods, so he decided to ruin the looks of an X1 instead – not that the stock one would win any beauty contests.

Originally, his premium subcompact crossover from the Bavarian company came in black, and he gave it 22-inch wheels. However, that approach didn’t attract as much attention as the guy whose name is written on the dotted line wanted, so he eventually made it stand out like a sore thumb.

Gone were the 22s, and in their place came a set of 26s, made by Asanti, and shod in ultra-thin rubber. We reckon he would have gone for even bigger alloys, though that would’ve required some chopping, and fortunately, that wasn’t on the menu. The chrome finish of the wheels has been replicated on other parts of the exterior. There are two stripes on the hood, ‘BMW’ roundels on the C pillars, similar to what you’d get on the X2, and privacy windows all around. An olive green look rounds off the modifications.

While certain X1 owners, such as this guy, keep modifying their rides, BMW is working on the third generation. Expected to launch later this year, it will feature an evolutionary styling and will look like a smaller version of the X3 and X5. A curved panel display will be the center piece inside, spy photos have revealed. It will still be front-wheel drive-biased, as it should be built around an evolution of the UKL platform, shared with the new 2 Series Active Tourer, and it is understood to launch with internal combustion engines and electrified assemblies. 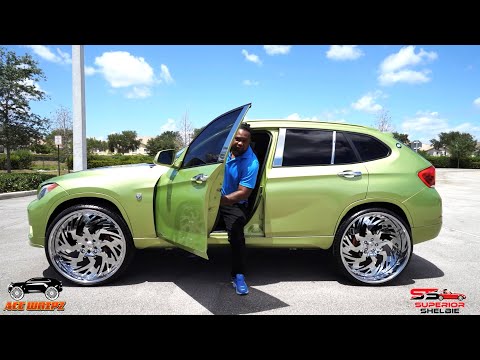