5 This Hybrid-Electric VTOL Aircraft Is a Clean, Quiet Alternative to the Helicopter
Car video reviews:
Coverstory

Earlier this month, Ohio-based company Event 38 launched the E400, its first fixed-wing VTOL (vertical take-off and landing) drone, boasting a plethora of premium features and capabilities. Now the aircraft manufacturer is back with another big announcement: it completed a multi-year project that started in 2020, flying a fixed-wing drone powered by hydrogen fuel cell.
7 photos

Event 38 teamed up with several experts at several universities to explore the possibility of powering drones with fuel cells, which prove to be a promising power source for this type of aircraft. Its biggest benefit is that it can significantly extend the flight time of the drone.

Not only that, but this kind of power relies on fewer moving parts, which means the drones using this fuel require far less maintenance.

Lastly, drones powered by fuel cells are much quieter than those powered by gas.

The Event 38 drone to demonstrate the benefits of hydrogen fuel cell power was a modified E400, whose design had to be scaled up to accommodate the significant size of the fuel cell. Event 38 came up with the E450 fixed-wing VTOL drone, whose carbon fiber structure has been customized to fit the fuel cell and tank. A custom thermal management setup was also developed to keep the fuel cell cool during flight.

The E450 took its demo flight on June 13, at Kent State University Airport, succeeding to stay in the air for two hours. However, Event 38 CEO Jeff Taylor says that with a fully pressurized hydrogen tank, the drone’s flight time could be boosted to up to six hours.

Using fuel cells as a power source for drones opens a whole new range of applications, with fuel cell-powered drones being suitable for deliveries or aerial surveillance, thanks to their improved flight time and low noise levels.

Customers interested in the E450 can choose between battery power, gas, and fuel cell. They have to contact Event 38 for other info on the aircraft’s availability and pricing. The E400, which is the model the E450 is based on, is a fully automated mapping drone with carbon fiber construction. It can handle payloads of up to 3 lb (1.3 kg), is battery-powered, and can stay in the air for 90 minutes on a charge. The drone can cruise at a speed of 31 knots (16 m/s) and can withstand winds of up to 23 knots (12 m/s). 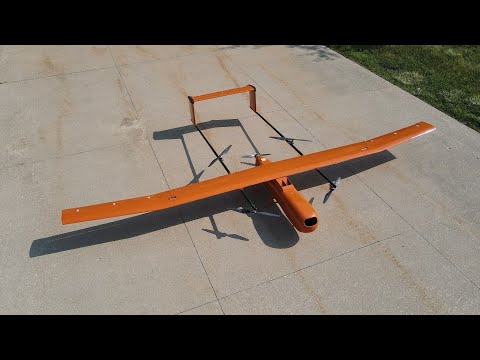