2 236-Ft Exquisite Megayacht Is Ready to Give You a Taste of the Good Life, for $76 Million

3 574-foot Acionna Mega-Yacht Dwarfs Ports, Towns, and Will Be Hydrogen-Powered

If you thought that the highest level of extravaganza when it comes to billionaires’ yachting is to own the largest and most luxurious superyacht, you’re not up to date. One of the biggest trends in high-end yachting right now is to also own a shadow vessel, known as a support yacht. An assistant for your superyacht, this intriguing type of ship shows just how far catering to the richest people in the world can go.

Earlier this year, it was reported that “space cowboy” billionaire Jeff Bezos became the owner of a massive superyacht, a “secret project” of the Dutch luxury shipyard Oceanco. The famous Y721, or Project 721, is a jaw-dropping 417-foot (127 meters) long monster, which actually makes it Holland’s largest yacht. Needless to say that this superyacht’s price matched its grandiosity, rumored to be around $500 million.

It was expected that Bezos’ new yacht will be accompanied by a shadow vessel from the start. It’s still unclear whether it will be built by Oceanco as well, but according to recent rumors, the Y721’s shadow yacht will be Damen’s largest support vessel to date, the YS 7512. Indeed, both the Y721 and YS 7512 are in the last stages of development, and expected to be delivered in 2022. It does make sense for the biggest support yacht to become the shadow vessel for the biggest Dutch superyacht.

Damen Yachts, one of the most renowned luxury yacht builders in the world, introduced its latest support vessel as a bespoke version of the YS 7512 model. This impressive ship is 246-foot (75 meters) long and can accommodate up to 45 people on board, including crew, staff, and guests.

While it’s still built with top-quality hardware and a luxurious finish, this yacht is more about the storage space – it’s meant to provide enough room for a wide range of tenders, submersibles, vehicles, diving gear, plus a helipad for the biggest helicopters around. Plus, most of the accommodation is dedicated to the staff, with just a few cabins available for guests, since this is an assistant-like vessel.

Apparently, the support vessel trend started because billionaire yacht owners didn’t have enough space for water toys. Those who wanted the biggest tenders, helicopters, and much more would have to sacrifice some of the onboard space that was meant for different activities. Having a secondary yacht is like taking an army of assistants with you on your sailing trip.

Not only does this take care of all the logistics hassle, but it gives a helping hand with most activities. Want to take a break and enjoy a beach party? The support vessel will get there before, set everything up, and make sure to “clean up” afterward. Want to do some exploring and visit remote locations? It will supply everything you need so that you don’t have to depend on the harbor infrastructure.

Also, according to Damen Yachts Managing Director, Rose Damen, this type of yacht is specifically designed to enable a faster and safer launch for bigger water toys, even in challenging conditions. It’s also about the volume and quantity. Most superyachts are simply not made to provide room for the biggest vehicles, or a super wide range. Going back to Bezos, it was also reported that the Oceanco superyacht won’t have a helipad, which is why it required a secondary vessel.

You can call it a garage at sea, or a luxury yacht for billionaires’ water toys (yes, they deserve one too), or a floating office, because it’s also supposed to provide a separate space for business meetings and corporate staff so that the “mothership” remains a totally private, intimate haven. Damen calls this yacht support concept “the smart stretch”, because it’s supposed to be, overall, a better investment than buying an even bigger main superyacht, which is not meant to be a water toy garage anyway.

The luxurious YS 7512 was spotted arriving from the Damen Shipyard in Galati, Romania, to Vlissingen, Netherlands, on board the Super Servant 4, at the beginning of August. The beautiful support vessel looks like a luxury yacht in its own right, and it is one. There’s no official information on the YS 7512’s price tag, but another Damen support yacht, the smaller Axis, was sold in 2020 for $50 million, so you do the math.

We probably won’t know for sure whether this is the support yacht for the biggest Dutch superyacht, until next year, when they are both due for delivery. If that’s the case, Jeff Bezos will become the owner of not just one, but two of the biggest high-end yachts ever built. 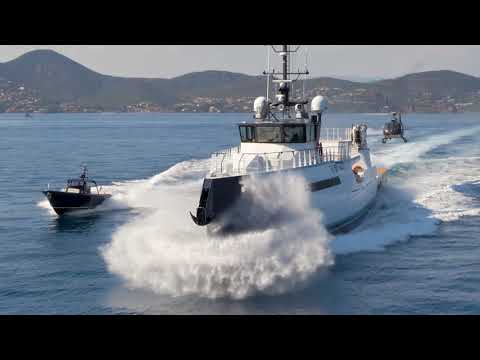