2 Britney Gets Behind the Wheel, a Helmet also Involved
Coverstory

Even Celebs Get Parking Tickets ... 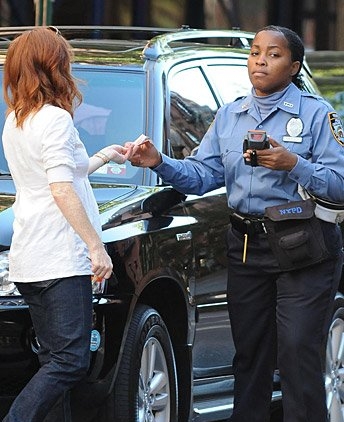 ... as actress Julianne Moore found out for herself yesterday while driving around New York. And it was an embarrassing moment too, because she came out of her home just as the parking officer was writing the ticket, which means she was there to get it right in her hand.

The moment was caught on tape by the photogs over at TMZ and promptly posted on their website for the entire world to see. It's one of those less glamorous parts in the life of a celebrity, but definite proof that fame doesn't get out of all the jams, well, not unless your Paris Hilton, cuz she has killer lawyers.

We can't see Julianne's face in the photo, but can tell she's pissed. Who wouldn't be? The last thing you need when you're in a hurry, is a parking warden handing you a ticket. As for the law enforcer, the look on her face says it all, she's quite satisfied with handing Julianne a little portion of justice in the form of a parking ticket.

But we're willing to bet it was a setup from one of the paparazzi that were lurking around her home, who decided it was tiresome to wait for something to happen so he called the police. For Julianne, this is at least time in the spotlight, as she hasn't done anything for a while. Right now, she has a movie in production, “Morgan's Summit” in which she plays the role of Gracie Holls.

Like someone once said: all publicity is good publicity. So Julianne's parking ticket can be seen as a sign the media is taking an active interest again. Or maybe it was just a curious passer by with a camera. Like we're that naive.