1 The TWIKE Is the Only Hybrid Velomobile You Need, But Comes at a Price

Electric powered cars are starting to make their presence felt more and more in the daily news, showing that people are starting to adopt them quickly for the petrol independence race. Speaking of which, last week, the biggest EV parade achieved a new Guinness World Record.
1 photo
Last week, 507 EVs participating at the National Drive Electric Week at an event in Cupertino, California, have been officially recognized by Guinness Records as the largest electric-powered vehicle group formed so far in the word.

It doesn’t sound that much, but the record only took evidence of the vehicles running solely on electricity. A big part of them have been disqualified due to other assistive power supplies, such as combustion engines or cycling pedals. Some didn’t have had enough juice to complete the full run, reason for which they went off the list too.

The event was joined by lots of Nissan Leaf models, Toyota RAV4 EVs, Tesla Modes S, a soon-to-enter-market Kia Soul EV and even a MINI E which closed the parade.

The four-seater solar-powered Stella concept also took part in the event, wooing people with its construction and efficiency. Let’s hope it raised enough interest to enter production some day. Who would’t want a small car for four people that costs almost nothing to run. 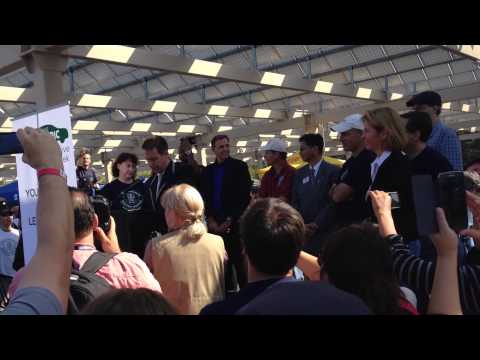