5 Germans Buy 10% of Cars Sold in Poland
Up Next

Europe's Scrappage Save the Day 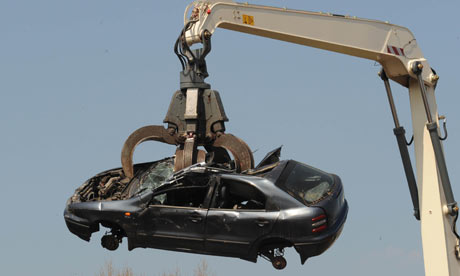 Or at least this is how it looks like. Thanks to the implementation of scrappage schemes across the continent, sales in May are no longer as low as we have got used to from the previous months. Overall, things are still bad, but at least Europe is crawling out from the depression pit.

Amongst the first countries to have launched a scrappage scheme, France managed to score an increase in sales, when compared to the same month in 2008. According to Autonews, French car manufacturer's association CCFA registered an increase in sales of 12.4 percent, amounting to 207,287 units sold.

Despite the fact that is the newest addition to the European scrappage map, Britain may soon take the lead in terms of sales. May brought an increase in orders of around 35,000 units, one of every five orders placed in the first two weeks being part of the campaign.

Spain, on the other hand, still suffers but, thanks to the local scrappage scheme losses are not as apocalyptic as they were so far. The drop registered in May stood at 38 percent. New car sales dropped from 116,112 units to 71,161. It is the thirteenth consecutive month which shows drop in sales in Spain. Just to remind you, sales drop in the country stood at 45.6 percent in April.

Italy is also still experiencing some difficulties, but the 8.6 percent drop in May does leave room for hope. It is the second consecutive month in which new car sales register negative values. This, despite the fact that Italy has one of the most rewarding scrappage schemes out there, offering up to 5,000 euros for every car traded-in.