4 McLaren Speedtail Abandons Itself to Custom Detailing and Paint Protection

Somebody actually felt that Porsche’s 911 GT2 RS launch color, the GT Silver – even with those exquisite exposed carbon fiber details, red interior, and champagne gold wheels – was not enough for his collection. So, he decided to call out a few specialists to alter the German sports car’s personality into something more akin to a Prancing Horse...
85 photos

You read that right – this Porsche 911 GT2 RS has been completely repainted and fully retrimmed to be in tune with the owner’s collection of matching Ferraris.

That includes a complete color shift for all GT Silver elements now sporting a Verde British Racing hue, and that’s not all, because even the wheels have been changed to match, while the brake calipers were repainted in a Ferrari-matching bronze shade with etched in Porsche lettering to make sure no one notices the difference to factory-like quality.

The same can be said about the interior, which has been completely stripped down and sent off to German specialists that usually work for Porsche Classic. They had an equally interesting project to handle, because they retrimmed all cockpit bits and pieces in a Ferrari-inspired luxurious leather atmosphere.

And when we say everything has been changed, we literally mean that – you can see in the attached video below that even the trunk space has been covered in the same mix of materials (cue in to the 19:05 mark for a nice detail, the First Aid kit done in leather and Alcantara!).

Speaking of the video itself, we can offer a secret – the folks at Topaz Detailing were very proud of their new project so decided to document every single step of the process. It’s quite nerdy of us to say we liked seeing the project unfold – but just watch and you’ll come to the same conclusion as we did: you can never go wrong with mixing atmospheric music with a cinematic strip down, customization, and then rebuild of a spectacular performance machine.

As such, we instantly got hooked of seeing the entire process unfold. First was the strip down, done by the company’s own “Gold-rated Porsche technician,” and unlike previous work from Topaz (which left the original paint untouched) this time around the GT2 RS was sanded down to prepare the surface for a permanent respray.

As we mentioned, the Verde British Racing hue matches the Ferraris in the owner’s collection (which has the initials “PL,” as evidenced by the vinyl applied at the 10:37 mark) and every single surface has been repainted, inside and out – right down to the wheels.

By the way, the company applied for this transformation what they call a “Level 5 Signature Detail,” which as far as we can tell included the steps for the repaint (done with the same shade as used by Ferrari itself), the application of the needed clear coats for the perfect finish, as well as the PPF (paint protection film) application that will ensure everything remains untouched by road usage or the passage of time. 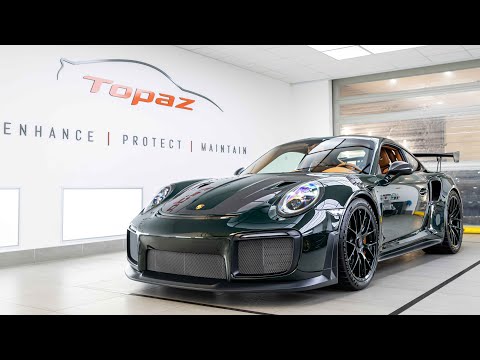