5 $700 Million Scheherazade Megayacht Has Refueled and Is Getting Ready to Flee Sanctions
Car video reviews:
Coverstory

One of the biggest captures since international sanctions list went into effect is the Lurssen megayacht Scheherazade. Formerly known as Project Lightning, its cost is estimated at over $700 million and its supposed owner is Russian President Vladimir Putin.
25 photos

Scheherazade was arrested in Italy, at the Tuscan port of Marina di Carrara, where it was undergoing refit, in early May. It had been there, in dry dock, for several months, and authorities arrested it just as it had been refloated and resupplied, seemingly preparing to flee sanctions.

On paper, the owner of Scheherazade is non-sanctioned Russian billionaire Eduard Khudainatov, whom authorities believe acts as “straw man” for Amadea too, the superyacht arrested in Fiji by the U.S. government. In reality, the real beneficiary of Scheherazade is probably Putin, aka the number-one on all sanctions lists for his brutal invasion of Ukraine.

In March this year, an investigation by journalist Maria Pevchikh and anti-corruption activist Georgy Alburov, members of Alexei Navalny’s Anti-Corruption Foundation (FBK), revealed that 23 of the permanent crew members on Scheherazade were members of the FSO, or the Federal Protective Service, Putin’s Presidential security agency. On his recent visit to Marina Di Carrara, vlogger eSysman SuperYachts did a bit more digging into that, and found that this FSO crew was the second main crew onboard.

It’s not uncommon for superyachts to use rotation for the majority of crew, he argues in a recent video (see below). What is uncommon is for crews to switch all at once, which happened with Scheherazade – and more so to do it without a proper handover. Scheherazade has accommodation for 94 crew, so that would be one huge transition.

Perhaps more striking and indicative of the fact that this is indeed Putin’s megayacht is the fact that those who came onboard had zero experience in seafaring. The same source reveals that one crew was instructed to make videos in English of the most basic running and maintenance tasks, like lowering a tender or putting out the floaters. The insider says these videos would then be subtitled in Russian, and the second crew would use them as tutorials to run the ship.

As it turns out, FSO agents are skilled in many things, since they’re tasked with safekeeping the President, but boating isn’t among them. The idea of having a $700 million monster of a yacht (Scheherazade is the 12th in the world by length, and among the most expensive) run by amateurs is almost comical, but would make sense if secrecy was the ultimate goal. 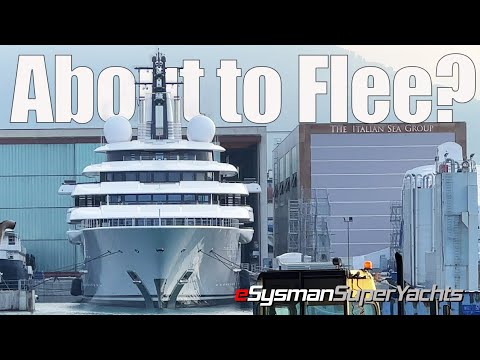