Every summer, automakers show off what they feel will be the next best thing for the following year. Well, the same is true for the RV industry, and one team, Entegra Coach, has begun to unveil its newest machines bent on off-grid domination.

Folks, the name Entegra has been a presence on the RV scene since 2008, when they became a member of the Jayco group. As time went on and Jayco's experience on their side, this crew became known for their "pursuit" of the ultimate luxury RV, regardless of vehicle class. Just don't call them for a travel trailer.

Well, this time, we'll be diving headfirst into the 2023 Launch Class B RV. But what makes this bugger so dang important is that Entegra considers it their "highest level of luxury." It's meant to take the mobile habitat experiences you've had and clean the slate with a motorhome that's filled with everything you need. This implies a level of versatility that will spark your interest even if you're not into leather seats, soft-touch ceilings, and the Boss audio system.

To help you understand a bit more about the Launch, I invite you on a little mental journey into a lifestyle that places you in the driver's seat of this mobile home. According to Motor Home Specialist, there may be one small catch: you're being asked to drop no less than around $233,100 (€220,400 at current exchange rates) on a 2023 Launch. I don't know about you, but the last time I dropped this much cash on something, it was for a four-year university diploma, which I'm still paying off.

But, there are countless reasons why you're paying at least this much on a unit. One of the first is that you're buying yourself a new Mercedes-Benz. Sure, showing up to a date with this sort of Benz may not be the best decision, but you'll impress on some level or another. Heck, if you showed up at my house with this machine, I'd cover meals and gas for a three-day journey. We don't even need to know each other's names.

Beyond the standard features like Koni shocks, a rear stabilizer bar, roof rack, ladders, and storage bays that tatter the exterior of Launch, it's the endless life systems that I want to bring to your attention. Standard, you'll find solar panels, an inverter, a water-saving and filtration system, a hydronic heating system, a Coleman AC unit, and batteries for storing the necessary charge to operate everything.

And that's not the end of it either. As I scrolled through the list of countless aspects of the Launch, it soon became apparent why the price. Heck, at the end of the list, you'll arrive at options, and I have to say, there isn't much there to add to this bugger. If there is, let Entegra know and break out the checkbook.

Ok, so you know you'll be kept clean and healthy, but what sort of habitat is offered inside? Like most RVs of this nature, the inside of Launch only seems to have space for just two sleeping guests, provided by a lift bed. Why a lift bed? Simple, to maximize the available space inside and open up a broader range of versatility for the Launch.

Think of things this way: maybe you want to take the van out for nothing more than a day's trip and won't be spending the night on the side of the road somewhere. Leave the bed above, and the rear of Launch is now a garage, suitable for e-bikes, maybe even some lighter motocross bikes; just make sure to fasten your machines in place so you don't damage the goods.

As for the rest of this mobile habitat, it's all there, folks. Nothing is missing, from an interior/exterior galley setup to swivel driver and passenger seats, modular dinette, a wet bath, and plenty of storage space for your clothing.

If you're taking that one-day adventure trip, there's space to bring along tools and anything else you may need. Yeah, you'll be paying a premium price, but at the end of the day, you're rocking a mobile home with the Mercedes-Benz logo leading your way. 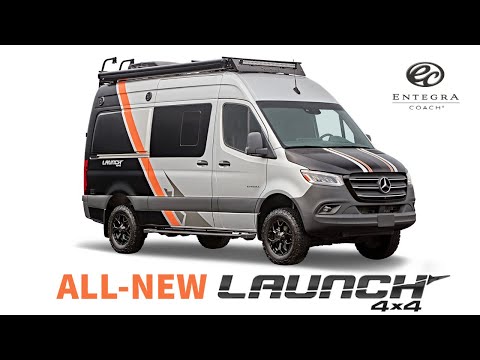 Editor's note: This article was not sponsored or supported by a third-party. The gallery display the 2022 Launch and its interiors as images for the 2023 unit are not yet available on the manufacturer's website.