1 Punch Moto Is a Suprematist, Striking Electric Motorcycle From Minsk

2 Gi FlyBike, the Impossibly Beautiful e-Bike That Turned Out to Be a Scam

3 YikeBike, World’s Smallest Folding Electric Bike, Is Unlike Any Other

Even though e-bikes have become more or less the norm in both urban and rural areas, there still are (too many) cyclists out there to yell “cheater!” at someone riding past them on one. This won’t happen with the Miller.

Enki Cycles has been around for some years now, having broken onto the market with Billy, a rugged, fast and reliable folding bike for off-roading. They followed up the Billy success with Miller, which launched on KickStarter in spring this year and has an estimated shipping date for this summer.

“We wanted to change the way you commute – to redefine it and make it something everyone looks forward to,” Philip Pedrola from Enki Cycles says. “So we made Miller. It’s the bike that will take you from A to B, but also to C, D and E. And when you get there, you’ll be puffed from the laughter not the effort.”

Miller is dubbed “the sleekest” e-bike out there and, while that’s debatable, there’s no denying that it makes it nearly impossible for anyone to tell this is an electric bicycle. The Samsung battery is hidden in the tube and the mid-mounted motor, while powerful enough to make commuting super fun and not sweaty, is disguised well enough for it to pass for a traditional bike. At least from a distance.

Commuting by bike is surely a healthy alternative, both for you and the environment, but it can become a messy chore if you do it the old-fashioned way. No one wants to get where they have to be sweaty and tired, smelly and frustrated. Miller will make sure this doesn’t happen.

It will do so with help from its powerful motor, offered in two models depending on the future owner’s location. There’s a Bafang M500 or a Bafang M600, with the latter meant for the U.S. In either case, the torque-sensing motor can deliver a top speed of 25 kph (15.5 mph), and Enki says it offers nearly 30 percent more torque and is lighter than similar offers.

There are five levels of pedal assist, but there is no option to ride in torque-mode only. You can opt for either a single- or three-speed configuration on your bike.

Hydraulic brakes in front and rear ensure maximum stopping power, and most cables are routed through the classic-styled aluminum frame for an impressively clean look. Instead of the old-school chain, the Miller uses top-of-the-line Gates CDX carbon belt drive that offers a silent ride – and a warranty for 30,000 km (18,641 miles).

The entire bike, battery and all, tips the scales at 15.5 kg (34.2 lb), which, again, makes it a solid choice in the crowded city environment since it’s light enough to carry inside or up a few flights of stairs. It rolls on WTB 37C Riddler gravel and cross tires.

Range is rated at 70 km (44 miles) on a single charge, but like with all e-bikes, it’s just an estimate. Enki tested it in various weather and road conditions with a 68 kg (150 lb) rider. That is to say, you can venture a guess on estimated range depending on how much or how little you’re willing to pedal. However, since this bike is made to keep you from breaking a sweat while commuting, Enki’s estimate is probably accurate.

Perhaps just as importantly as performance, Miller delivers in terms of aesthetics as well. It doesn’t stand out as an electric bicycle and is sleek and elegant to be a natural fit in every scenario you can think of in the city. It comes in three frame sizes, including one with a sloped tube for those riders who don’t fancy swinging their legs up on the regular. 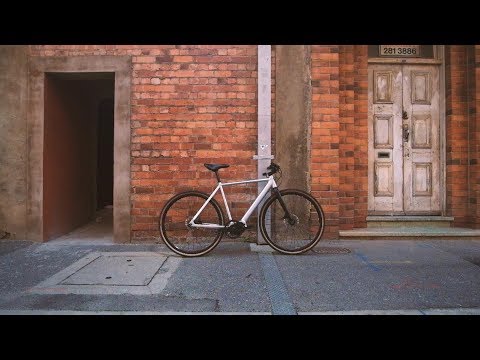