3 EnergyDome Proposes to Use CO2 to Store Renewable Energy

5 Batteries: Lithium-Ion or Solid-State?
Car video reviews:
Up Next

The facility is located in Sardinia, Italy, and although it is a small one, it demonstrates that the company's proprietary technology works. Its launch marks an important milestone in Energy Dome’s journey, with the company claiming that its CO2 battery technology is now ready for market and can be quickly deployed on a global scale.

Although it only began its operations in February 2020, Energy Dome managed to quickly go from concept to full testing at a multi-megawatt scale in just two years. The company has already managed to secure multiple commercial agreements that allow it to build long-duration energy storage projects in locations such as Italy, Germany, Africa, and the Middle East.

Energy Dome’s facility in Sardinia uses off-the-shelf equipment. The technology used is a cost-effective one and doesn’t use any rare or exotic materials, but readily available ones such as carbon dioxide, steel, and water. The CO2 batteries can be deployed anywhere in the world at less than half the cost of similar-sized lithium batteries, according to the Italian company.

What makes that possible is the fact that CO2 is one of the few gases that can be condensed and stored as a liquid under pressure at ambient temperature. As explained by Energy Dome, that allows for high-density energy storage without requiring extreme cryogenic temperatures. The CO2 battery can work in two modes: a charging mode, absorbing power from the grid, and a discharging one, returning power to the grid.

It may not be the easiest thing to wrap your head around, but what Energy Dome does is take the CO2 at near atmospheric temperature and pressure and compresses it, then stores the heat that is generated in the process. When exchanging the thermal energy with the atmosphere, the CO2 gas becomes liquid. To generate electricity, the liquid CO2 is heated up and converted back into a gas that is used to power a turbine and return power to the grid. Energy Dome ensures that there’s no leakage to the atmosphere during all these processes, with the entire system being sealed.

Next, the company says it’s working on its first full-scale 20MW-200MWH plant, which is expected to be deployed by the end of 2023. 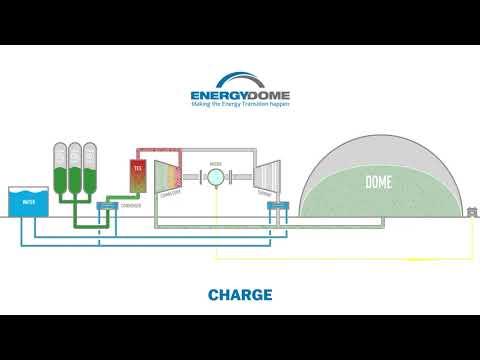