3 1963 Cadillac Supposedly Owned by Elvis Presley Found in a Junkyard, It's a Pink Mystery

Elena Gorgan
Elvis Presley may have been the King of Rock ‘n’ Roll, but for the final years of his life, he was also the king of excess. Diamond jewelry, collectibles of all kinds, expensive cars and motorcycles, and his very own fleet of private jets, Elvis had them all.
30 photos

Today, it’s almost impossible to keep track of the items that Presley bought, briefly owned, or purchased in bulk as gifts to friends and associates over the years. His love for Cadillacs and Harley-Davidsons is almost as well known as his love for rhinestone suits and giant diamond rings, but he also loved aircraft. Always a busy businessman and the country’s most beloved artist, he needed fast – and luxurious – transportation.

Elvis owned a small fleet of aircraft he collectively called the Elvis Presley Airways. It counted on three private jets that he would use for business and pleasure alike, to travel around the country at a moment’s notice, and all of them were customized to suit his particular tastes.

Two of these aircraft are now back with the Presley Estate and proudly displayed at Graceland; the third one was lost for decades, after it was abandoned in New Mexico, but is now back in the headlines.

The first two aircraft were also the ones he used the most. There was the 1958 Convair 880 he bought in April 1975 and which he renamed Lisa Marie, after his daughter, once customization was complete. Urban legend has it that he also called it the Flying Graceland, because it was the closest thing to a flying mansion at the time, including a conference room, a bedroom, and a spacious bathroom. The other one was a 1960 Lockheed JetStar executive business jet he bought in September 1975, while waiting for delivery on the Lisa Marie, which he called the Ground Hog II.

Elvis bought his third private jet months before his sudden death in August 1977 by heart attack. It was also a Lockheed JetStar, but a newer model, from 1962, and he got it as a Christmas present to himself in 1976. Considering the fact that the Presley Estate initially sold the first two jets and then spent a fortune getting them back and restoring them for display at Graceland, it’s likely that Elvis never really set foot on the second JetStar, the L-1329 registered as N440RM.

For a diehard Presley fan, this will probably matter very little. As announced earlier this year, the jet is coming up for auction with Mecum, at the Kissimmee 2023 event between January 4 and 15. More details have been released ahead of the auction, including confirmation of the fact that it’s a ‘62 Lockheed and its full backstory. Sadly, it’s nothing as glam as The King’s life seemed from afar.

Elvis was not the first owner of this jet. He paid $840,000 for it, which is about $4.4 million in today’s money, adjusted for inflation. Mecum doesn’t say whether he customized it to its current, red velvet interior with gold hardware, but since this is Elvis we’re talking about, it’s likely. The plane was sold by the Presley Estate shortly after his death, and it would soon be abandoned at the Roswell International Air Center (ROW) in Roswell, New Mexico. It is still there to this day, as the video below will show.

For a piece of Elvis Presley memorabilia, especially one of this size, the neglect towards it is jarring. The aircraft has been stripped of its four Pratt engines and many of the cockpit components, and it’s in a very bad state on the outside, showing the signs of years spent exposed to the elements.

That said, the interior is in relatively decent condition: offering seating for eight passengers and three crew members (two pilots and one flight attendant), it features plush red velvet furniture with gold hardware over a red carpet, wood paneling, and beige suede headliner. You don’t have to be a huge Elvis fan to know that he loved rich fabrics, particularly velvet and suede, particularly in bright colors; so yes, this was most likely a custom interior.

By modern standards, this private jet is positively rudimentary, but for those times, it was top-notch. There was a hidden AV entertainment system with audio cassette and VHS players (and wooden slots to house the cassettes) and a TV hidden behind a wooden partition.

There was also a galley with a microwave oven and a drinks dispenser, as well as a bathroom with a marble-like vanity and a toilet seat hidden beneath a couch pillow in the same red velvet. When you’re The King, even your toilet seat is more comfortable and fancier than regular people’s.

It could be that this aircraft will never fly again, and not just because it’s missing its engines: it is no longer in a condition to do so, and the amount of effort and money it would require to restore it to air-worthy state is staggering. But it could still serve as a museum showpiece, which is how Mecum is selling it. As long as you’re willing to put in the extra work (and a lot of it!), this could be the last thing you needed to perfect your Elvis Presley cosplay. 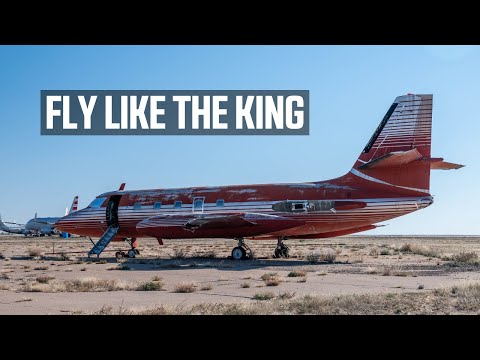