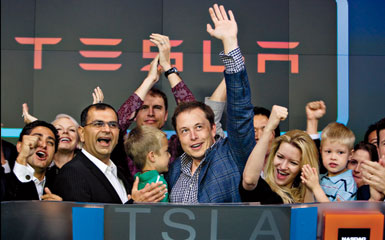 This week, Elon Musk, perhaps one of the most active young entrepreneurs this year, announced he would end 2010 by doing a bit of charity work. The Tesla CEO will be donating a solar generating station to the Hurricane Response Center, an institution operated by the South Bay Communities Alliance.

The donation is being made by Solar City, another company owned by Musk, through the Musk Foundation. The station is a 25-kilowatt station and has been designed to provide about 90 percent of the center's daily electrical power needs.

"This summer's gulf spill was a stark reminder of the difficulty we face in reconciling the energy needs of the population with the need to protect the planet's vital ecosystems," Musk said in a statement cited by Edmunds.

"For the people on the front lines, like families of Coden and others along the gulf coast, these difficulties remain long after news of the disasters fade from the headlines."

"I believe that we can make the change necessary to greatly reduce our dependence on the finite power sources that pollute our air and water and complicate our geopolitics, one rooftop at a time."

The donation is worth between $170,000 and $200,000, but the advantages it brings for the center are worth more than that, as the solar power station will save it thousands of dollars each year. The Hurricane Response Center, built as a tool to help the areas devastated by the Hurricane Katrina in 2006, was the perfect recipient for the solar power system, Solar City said.