2 Jeffrey Dean Morgan Got High and Bought Himself a Tesla, Forgot About It

Apple Car Could Come With Infrared Headlights for Improved Visibility

You could argue that despite being the first car developed by the Palo Alto company from the ground up, the Model S is still the best vehicle to have ever worn the Tesla logo.
1 photo
Considering three more models have been launched since (X, 3, and Y), the fact you can still point at the original and say it's superior isn't exactly flattering for Tesla. On the other hand, the carmaker did raise the bar very high with its first attempt: a good-looking sedan capable of beating most sports cars (and plenty of supercars) over the quarter-mile while also offering room for seven people*.

About that asterisk: earlier Model S versions offered the option of two jump seats in the back, big enough to fit only children. The option was later discontinued. Whether that was because the kids would take full advantage of the rear-facing nature of those seats and spend most of the time digging for boogers (to the despair of their parents) or because Model X sales needed some help, we will never know. What know the Model X remained the only Tesla vehicle with more than five seats until the seven-seat Model Y was introduced.

Now, though, we have official confirmation (if a tweet from Elon Musk qualifies as confirmation) that the new Model S will feature a third row of seats again. Previously, Musk suggested the two rearmost seats would be big enough to fit not just kids but also adults, and an earlier clip captured by a drone caught a glimpse of what looked like a pair of front-facing third-row seats in the back of a refreshed Model S.

"The new Plaid S is our best car ever," Musk wrote in his reply to @WholeMarsBlog. "Will be first production car to achieve 0-60mph in under 2 secs & it has four doors & seats up to 7 people." The Tesla CEO went on to praise the people-carrying abilities of the old Model S saying, "I once did a road trip across most of [the] U.S. with 2 adults & 5 kids in a Model S!"

Regardless of the seating situation, if everything else about the Model S Plaid checks out, it does indeed sound like a very exciting prospect. Considering the vehicle's performance, we would fully expect the third row to be front-facing. After all, you wouldn't want the seatbelts to be the only things holding your kids from becoming way too intimate with the inside of the tailgate while you're deploying the full Plaid mode, would you?


The new Plaid S is our best car ever. Will be first production car to achieve 0-60mph in under 2 secs & it has four doors & seats up to 7 people. 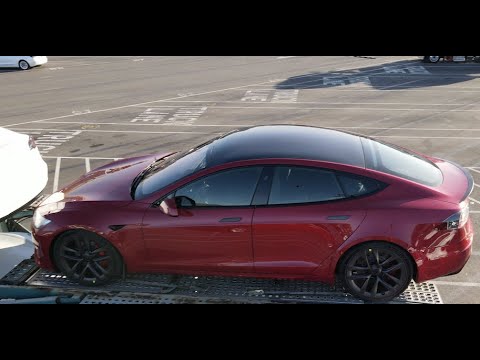