1 Tesla Cybertruck, Cyberquad Made Their Music Video Debut and You Missed It

2 Ian Roussel Space Junkie 2.0 Is the Tesla Musk Should Make for Mars

3 Americans Are Not Impressed With the Cybertruck, Survey Shows

4 Musk Open to Sending Cybertruck to Space on Starship

5 Tesla’s Cybertruck Might Be Cursed as Second Showing Comes With Another Blunder
Car video reviews:
Coverstory

It’s good to be Elon Musk in the year 2020. It was amazing to be Elon Musk in 2019 as well, as Tesla vehicles swept various international awards and won over customers’ hearts, but 2020 is kicking off on a very high note.
11 photos

The Tesla CEO was at the Gigafactory outside Shanghai, China, presiding over the ceremony marking the start of production for the Model 3 in the country. This is Tesla’s third Gigafactory and the first outside the U.S., and starting delivery of the vehicles here marks what Bloomberg describes as the very real start of competition in this massive market.

As in, stuff’s about to get really real.

Musk knows it and he’s clearly (and understandably) psyched about it. He’s so psyched that he actually busted your dad’s most awkward moves right there, at the ceremony. You can see him in action in the video below. Whether this is straight-up funny or simply endearing is, of course, a matter of perception.

There’s a saying about “dancing like no one’s watching” and this is what Musk is doing, as Axwell Ingrosso’s “More Than You Know” booms over the poor female presenter’s OKs. She thought she could get Musk to cut down on the foolery, but she had no success, so in the end, she decided to let him have this moment.

Musk had it and he obviously enjoyed it so much he even included a video of it on his Twitter. You have to love a man (or woman) with a good sense of humor about themselves, especially when their stated mission is to make this world a better place. Sure, they’re making billions in the process but it’s the thought that counts, right?

All dance moves jokes aside, the event marked the handing over of the first China-made Model 3s to the public. The first one – in white – went to a man from the nearby city of Wuxi, the publication reports. Deliveries actually started last week, but they were limited to Tesla staff, so they don’t count.

At the same event, Musk introduced the Model Y for the Chinese market, which he believes will be more popular than all the other models combined.

Let Elon Musk break it down. 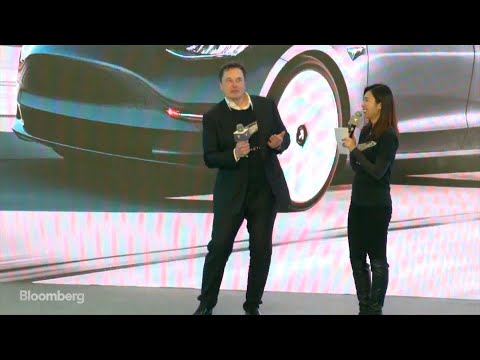