5 And Now smart Is Part Chinese
Car video reviews:
Up Next

We've all been briefed on the benefits of electric powertrains, so we all know about their torque trick. Unlike combustion engines with complicated transmissions, an EV will have all of its torque available from the moment the accelerator pedal is pressed.
39 photos

It's a useful thing to have, particularly since electric vehicles tend to be not much lighter than their ICE counterparts thanks to the bulky battery pack. If we were to oversimplify things, we'd say that you need torque to make something move, and you need power to make it move faster.

Naturally, that means EVs aren't just good at propelling themselves off the line, they're also good for towing. You can look at the towing capacity of vehicles such as the Tesla Model X (5,000 lbs) or the promised one for the Tesla Cybertruck - which, at 14,000 lbs is greater (by no coincidence, we can guarantee) than that of any Ford F-150 model - to get an impression of how the immense weight these vehicles can pull. And those are the official stats, meaning they could go for much more than that.

But how about a first-gen smart fortwo electric drive? What towing capacity does it have? The manufacturer never bothered to list it since nobody would ever use it for towing. However, the question still stands. Enter The Fast Lane Truck, a YouTube channel usually posting off-road stuff that seems to have wanted to try something new and decided on testing the smart against a Jeep Gladiator, a Chevrolet Silverado, and a Ford F-250 camper.

As proficient as EVs are at towing, the smart only comes with 96 lb-ft (130 Nm) of torque, which is more than enough for a car of that size, but quite measly when you look at the monsters it's supposed to pull. Well, TFL actually went out and tuned the little ting so that it developed 115 lb-ft (156 Nm) of torque - that's a 20 percent boost, so quite significant.

Still, strap one of those trucks behind any non-electric 115 lb-ft car and it'll struggle to move it, if it'll move at all. So, how about the smart fortwo electric drive, then? Watch the clip and keep your fingers crossed, the tiny EV will need it. 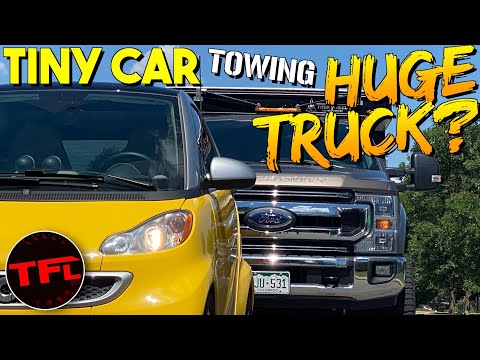