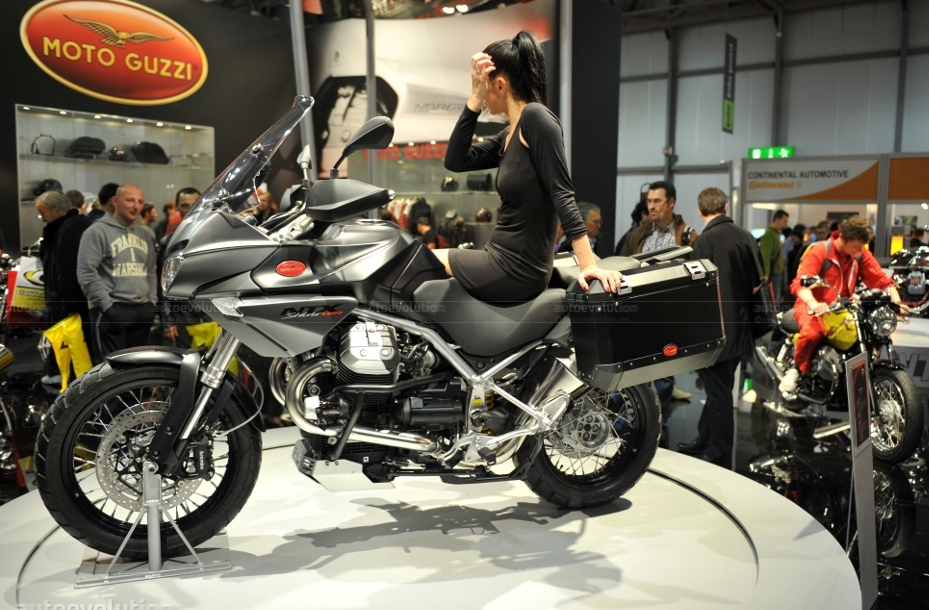 The international moto show in Milan saw Moto Guzzi showcase two brilliant variants of its Stelvio 1200, the “NTX” and the 8V.

It is meant to be a direct competitor to the BMW R1200GS that develops 110bhp, 88lb/ft and weighs 229kg (504lbs). What both the engines in the Moto Guzzi and the BMW have in common is that they are both old engines given a new lease of life by means of new four valve per cylinder heads.

The rest of the bike is equally simple in it’s ruggedness: sump guard, engine protectors, handlebar bash guards, aluminum panniers and halogen spotlights. There’s all you need for a short dash to the Himalayas and back. The front suspension is fully adjustable and there is even a handlebar-operated glovebox.

The Stevio 8V comes as standard with a number of accessories such as aluminum top box, TomTom Rider2 and navigator holder, heated hand-grips, headlamp guard. The 2011 Stelvio 8V features a massive fuel tank capable of holding 32 liters (8.4 gallons) to go along with a a bigger windscreen and a softer saddle so riders will be more comfortable when doing those extra miles the big tank allows for.

The two bikes are the ideal choice for off-roaders who prefer a bit of Italian soul to German seriousness and badge snobbery.