1 Arc Shares First Video of Its $300K Electric Boat on the Water, Makes Waves in California

3 Ingenity Launches New Electric Day-Boat, It's All About Cruising in Luxury and Comfort

5 This $78K Luxury Electric Water Toy Is a Game-Changer, Cuts Through the Waves at 25 MPH
Car video reviews:
Up Next

Eelex 8000 Is Dubbed the Tesla of Electric Boats, It's Smart and High-Performance

Launched in the U.S. last year, at the Palm Beach International Boat Show, Eelex 8000 is the electric boat of the future. It’s smart, tech-packed, and built from sustainable materials.
13 photos

Developed by Swedish company X Shore, the 26 ft (8 m) Eelex 8000 is described by the manufacturer as the Tesla of electric boats. It has a modular design, is customizable, and is built for high performance.

X Shore used low-impact materials such as recycled plastic and cork instead of teak, aiming to start with its floating Tesla a new, more sustainable maritime tradition. The boat has that distinctive Scandinavian look to it, featuring a clean and minimalist design. Sporty in appearance, the Eelex 8000 presents itself as graceful yet solid and powerful at the same time.

You can configure the Eelex 8000 in countless ways, with X Shore offering a plethora of furnishing possibilities. You can opt for various modules for the boat and customize it to your taste, with more than 10 layouts being available.

While the electric boat may strike you as minimalist based on its appearance alone, don’t let its clean, simple design fool you. They call it the Tesla of the e-boats for a good reason. Several of them, actually. The Eelex 8000 is packed with first-class technology, starting with its carbon-fiber roof with built-in Bowers and Wilkins speakers and ending with its 24” touchscreen powered by Garmin with X Shore-designed software. The latter is part of the center console that lets you monitor the boat, access and adjust all its functions.

You can use the Marq smartwatch and the dedicated X Shore app as remote keys for the boat, controlling various features of the Eelex. For instance, there’s a Man Over Board safety feature that automatically stops the boat in case you fall while wearing the watch. There’s also an anti-theft system included that allows you to activate a geofence and receive in-app alerts in case your boat crosses the set perimeter.

X Shore’s all-electric and sustainable boat starts at a price of approximately $330,000, but you have to contact the manufacturer for more details, especially if you want to customize it to your liking. 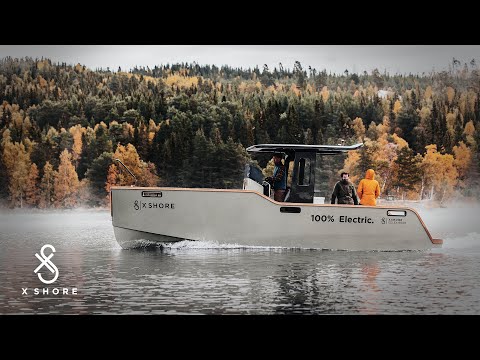