A little over three years have passed since the GT Four-door Coupe has entered the market as an unofficial replacement for the ill-fated CLS 63 and Mercedes-AMG's direct rival for the successful Porsche Panamera.
24 photos

It is Affalterbach’s first four-door developed entirely in-house, with no correspondent in the Mercedes-Benz lineup, despite using the same MRA (Modular rear-wheel-drive Architecture) as almost every modern Mercedes with a longitudinal engine.

The Mercedes-AMG GT Four-door Coupe has been mimicking the Porsche Panamera on every level except one. The Turbo S E-Hybrid is the only Porsche version without a correspondent in Mercedes-AMG's lineup.

This will soon change when the mid-cycle facelift for GT Four-door Coupe gets an electrified top-of-the-range version expected to rewrite the rules when for both performance and horsepower in the luxury four-door segment.

As part of the so-called "E Performance" strategy, the Mercedes-AMG GT 73 e will be the most powerful production AMG model in history, thanks to a plug-in hybrid setup that combines the twin-turbocharged 4.0-liter V8 of the GT 63 S with an electric motor powered by an innovative lightweight battery, also developed in-house.

With a combined output of over 800 horsepower and around 1,000 Nm (738 lb-ft of torque), the model is expected to trump the quickest accelerating Panamera by quite a bit amount, becoming the first production sedan to go under 3 seconds for the 0-100 kph (62 mph) sprint.

On top of it, the official fuel economy figures should be much better than those of the GT 63, which uses a similar powertrain but without the addition of a powerful electric motor.

Despite the GT 73 e's green credentials, the car doesn’t exactly sound like an eco-friendly grocery-getter while being thrashed on the Nürburgring, as the following spy video demonstrates.

Even though the 4.0-liter V8’s roar has been muted across the entire AMG range thanks to the addition of Gasoline Particulate Filters (GPF) and tightening exhaust sound rules in Europe, the GT 73 e still sounds like a WW2 fighter plane at full chat. 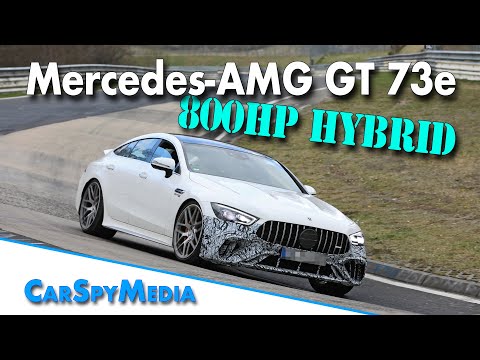