2 Ford Mach-E and Model Y Embark on the Loveland Trials, Surprises Are a Given

Early 2021 Tesla Sentry Mode Footage Has It All, Including Space Rocket Launch

Home > News > U-turn
Aurel Niculescu
We all know that Tesla’s Sentry Mode has always been about adding that extra layer of protection “by continuously monitoring the environment around a car when it’s left unattended.” With its built-in cameras and alarm mode, it should make the brand's electric vehicles a bit more secure and the owners a lot more relaxed.
17 photos

In practice, not even this advanced feature may ever come to protect against all thefts, break-ins, and other threats – but it sure makes a good case for itself by presenting the evidence to the police. And, when there’s no actual jeopardy involved, it can also make for a pretty neat compilation of funny occurrences.

We have already seen what happened when a Tesla Model 3 unwillingly T-boned an older Ford F-350 – the uninsured Blue Oval was a clear case of EV write-off following the unfortunate incident. This time around, we’re treated to some early 2021 Tesla Sentry Mode footage – but don’t think that’s cause for little to no action.

Instead, it seems the first days of the new year have brought a spree of incidents, including some parking lot hit-and-runs and even a 30-mph (50-kph) car crash. And that’s just the tip of the iceberg because the Wham Baam Teslacam channel on YouTube has just about everything you can imagine, from thieves casually showcasing their underwear to a close-by space rocket launch sighting!

After first getting to check out on a startled young lady – clearly not everyone knows about Tesla’s LEDs flashing when Sentry Mode enters the “Alert” state – we see no fewer than three attempted thefts (some successful, unfortunately), with noticeably two of them from people who are casually displaying their... underwear.

Following this gross moment, we get to happier incidents, including something that looks like a memorable TikTok video (from the 3:13 mark) and some other dance attempts. There’s even someone who’s a bit unlucky these days; first his P100D was involved in a parking hit-and-run incident (from the 8:19 mark), and when he borrowed his father’s Performance Model 3, he got rear-ended while waiting at a red light!

Still, the highlight of this compilation video comes from someone who managed to capture a space rocket during launch. He was there because he does that for a living, but his Tesla’s Sentry Mode decided to kick and provide an additional POV to the incredible feat of human engineering.

The interesting occurrence, which can be seen in the video below from the 5:08 mark, was triggered because the Tesla was parked so close to the launch site the massive sound wave from the rocket’s engines managed to trigger the “Alert” state. 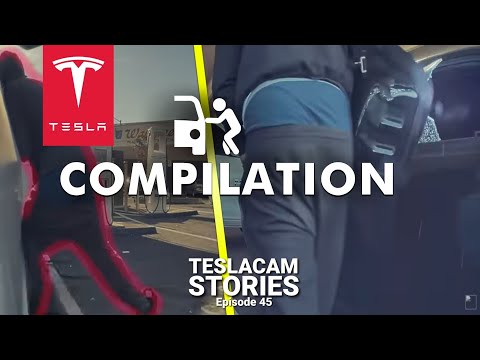