3 Supercar Blondie Checks Out the New BMW XM, Calls It the SUV of the Future

Born in Morocco in 1959, the one and only Frank Stephenson is rightfully considered an influential automotive designer. After penning the double rear spoiler of the Ford Escort RS Cosworth, he subsequently moved to BMW AG where he penned the German automaker’s first utility vehicle.
7 photos

The E53 that ran from 1999 to 2006 looks elegant compared to modern-day BMWs, especially if we’re talking about the Concept XM. Stephenson begins his design review of the M-badged sport utility vehicle by analyzing the front end, which he describes as nonsensical. Frank is especially offended by the front lines that go in completely different directions as if they don’t know where to go. The backlit kidney grille doesn’t help either, and the weirdly shaped headlights look unlike anything else from BMW.

From the three-quarter perspective, the front wheel arches are the worst offenders. “What benefit does putting so many lines around a round object have? None! Of course, except to be different,” said the man who also designed the MINI Hatch. “I don’t like it. It’s just angles for angles’ sake.”

The side analysis is similarly frank (pun intended). More specifically, Frank claims there are too many dead lines and fussy angles that don’t combine into a cohesive whole. As for the rear end, “it does physically hurt me to look at the rear end. Why do you need two logos on the rear windscreen?”

Considering that Stephenson doesn’t have any bad blood with BMW, it goes to show just how bad the Concept XM really is from a designer’s perspective. Fast forward to the 12:45 mark of the following video, and you’ll hear Frank state that “BMW have really lost their f#&%ing minds.”

All things considered, the atrocity that’s supposed to celebrate 50 years of M receives an F rating from Frank Stephenson, with F standing for failure. “BMW has now entered a league of their own. Sorry, but that’s my opinion.” 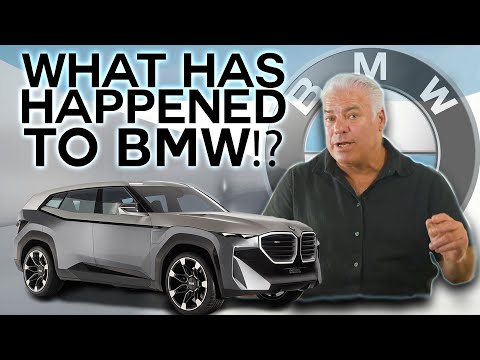