4 Japan Blows Urban Mobility Away With Canguro, the Most Advanced Partner Android

5 The Step Twin Bionic Bike Uses an All-New System to Propel Your Bike
Car video reviews:
Up Next

What are we to do with all these e-bikes designs? Better yet, how do we solve some of the issues that arise from their use? We continue to make them, in the hopes that newer models will ultimately be better than the last, but sometimes, that better model already exists.

What we see is called the E3 from e-mobility giant Airwheel. It’s possible you've seen their A3 with its maglev propulsion. As for the E3, this is just one of the older e-bike designs they came up with. But, just because it’s older, doesn’t mean it still doesn’t put many e-bikes to shame.

First of all, it’s very small. How small? Well, folded, it sits slightly larger than a tablet. Depending on the size of your screen, it’s even possible your current tablet, if you own one, is bigger than this e-bike. But how is this achieved? Let's find out.

For something this small to be able to handle the weight of an adult, it has to be constructed rather well. To achieve such strength the makers threw in a magnesium and aluminum alloy frame that can carry a rider up to 220 lbs. (100 kg). Another benefit of this alloy is it’s exceptionally light. The entire bike, with components and all, comes in at just 27.5lbs. (12.5 kg).

Now, the bike is set-up as follows. It all stands on two eight-inch tires that are supposed to help the whole thing using less energy than average tires found on...You know what? It just doesn’t feel right calling the E3 an e-bike. I just can’t. If I was to compare it to an e-bike, then this is the circus version. After all, it doesn’t even have a chain. But since majority rules on this apparently democratic Earth, then I too, for the sake of argument, shall call this a scooter. It doesn’t even have a chain or belt drive, so scooter it is.

Ok. Back to business. So, the tires are made of low energy consumption rubber and are held in place by two just-as-small forks that are set on a hinge. It’s this hinge that allows the wheels to be folded into position. But where do they go? If you need to pack up the scooter, the wheels will fold into those two circles that act as part of the frame.

One thing I found odd on this scooter is the seat. If you haven’t guessed yet which part is the seat, it’s those two black pads you see towards the rear. Apparently, they’re supposed to be some ergonomic design that literally supports each butt-cheek independently offering a 40% increase in comfort in comparison to traditional saddles. That one’s a bit hard to believe as there really is no comfortable way to sit on a barstool. But hey, until I try it, I'm not going to disregard it.

The handlebars too have their own set of functions to add to the scooter. Here you’ll find the throttle, EBS, headlight, a support for your phone, and a bell of course. And yes, this folds too.

As for the battery pack, can you guess where it is? It’s that square box right between the seat and the handlebars. This tiny cube has a capacity of 247.9Wh and even includes a USB port to charge your device. But what we don’t know is how long the fun will last. Although, once drained, you’re up and running again in a little over three hours. All of this powers a 300W hub motor found I the rear wheel, which also includes the EBS I mentioned earlier.

As for its size and weight, it seems that the scooter will fit in a backpack. The E3 only comes in at questionably low $478 (400 euro at the time of writing this article), and free shipping. Christmas is coming! 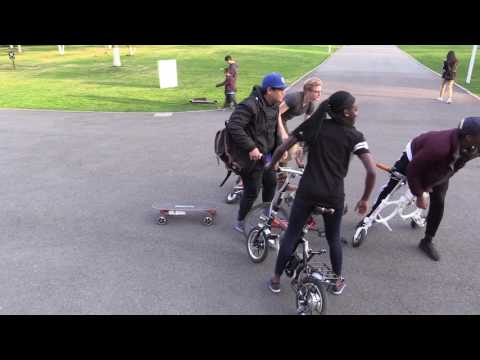