Home > News > Industry
Alex Oagana
Not many people are aware about this, but currently there only four naturally-aspirated engines left in the Mercedes-Benz stable, two of them being used exclusively on AMG models and headed for an end of production in a maximum of two years.
1 photo
As you know, one of the downsides of fitting a turbocharger on the exhaust system of an engine is smothering most of the sound that tickles the soul of so many old-school performance car aficionados.

Sure, turbocharged AMG engines don't necessarily suffer from this problem that much, but they do sound more muffled down compared with their naturally-aspirated predecessors, of which the M156/M159 family of powerplants is now legendary.

That is probably one of the main reasons for why the owner of the following Mercedes-Benz E 63 AMG W212 (pre-facelift) decided to replace his stock exhaust mufflers with a pair taken from a C 63 AMG W204.

Not only that, but the mufflers have actually been fitted with electronically-controlled by-pass valves from Innotech Performance Exhausts (iPE), which are among the loudest in the business when fitted to a naturally-aspirated C 63 AMG.

The real question probably revolves around the fact that the stock squared-off exhaust tips are now oval, which in our view doesn't quite work with the blocky-look of the pre-facelift E-Class W212. What do you guys think? 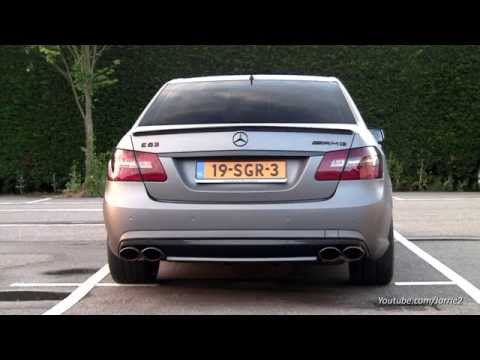