4 Air Pollution Reaches Critical Levels in Beijing, the City Is All but Shut Down
Car video reviews:
Up Next

Beijing went through a dust storm this week, and it locked down the city because of its severity.
1 photo
Older adults and children were instructed to stay indoors, and residents were advised to avoid any outdoor activity. In other words, it was so bad that people were asked to stay inside to prevent any injury or harm. The storm came from Mongolia and the Inner Mongolia Autonomous Region, and it went as far as northern China.

The city’s air quality ratings went well away from the recommended World Health Organization Limits. The environmental agency in Beijing reported small breathable particles at 500 micrograms per cubic meter, which is about 20 times more than the maximum safe level for humans.

Dozens of flights have been delayed or canceled to prevent any accidents or potential damage to the airplanes, and traffic was restricted to avoid further troubles on the road. Beijing’s air quality has been a problem for the authorities for several years now, and smog is also something common in the city.

Evidently, it is not normal to have smog in a city, and having its residents become accustomed to it. The health hazards of this phenomenon are worrying. Chinese people have taken to social media to express their outrage with the weather, but it was done in a humorous manner.

As the BBC notes, one resident of Beijing said that he “feels closer to lung cancer,” while another stated that he had “gotten used to the smog, and it is time to try something new.”

Pollution in the China’s capital gets worse in the winter, because heating plants work with coal. The city’s first “Red” alert for pollution was issued back in 2015, and authorities are struggling to improve the situation.

The measures that have been undertaken include closing factories, planting more trees, and reforming the coal industry. The continuous expansion of the city into the desert did not help improve the situation. 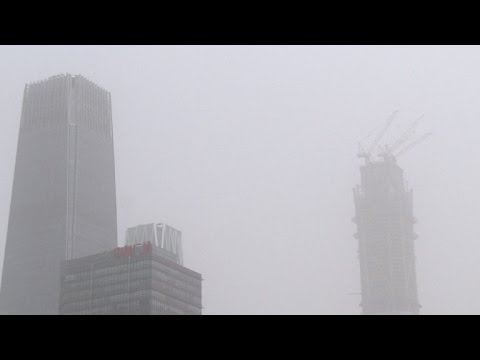