4 1,000 HP Ferrari SF90 Stradale Powerslides Like It's Nothing on Fiorano Track

5 Rolls-Royce Cullinan Can Donut Although the SUV Doesn’t Exactly Like It
Car video reviews:
Up Next

Out of all the things you can do for fun in a vehicle, drifting sits up there with the best of them. Whether it's lapping a world-famous circuit in Germany, crawling up a rocky trail, glazing over sand dunes or just spending some time on the back seat with the right company, drifting a car can always find its way in there somehow.
6 photos

What's so special about going sideways? Well, it's just that: you're doing something you're not really supposed to, which is always a good recipe to get the adrenaline flowing. Plus, it's also not the kind of situation you come across very often (unless you're Ken Block, that is), so there's also the novelty factor.

You definitely shouldn't be getting the chance to do it when you're driving an articulated 40-ton dump truck but try telling that to this guy. This unnamed, unidentified legend of a driver from Chesterfield, the United Kingdom, was enjoying a regular day at work in the beautiful English weather. He was just coming up to receive a load (not my words, it's in the video's description) from an excavator when he spotted an opportunity.

He saw a way of doing something that would both make his day more enjoyable and receive praise from his supervisor for reducing the time spent lining up the truck with the digging machine. As he was approaching the excavator, he swerved aggressively to the left, leaving the wet mud on the ground to do the rest.

A few more maneuvers later, he was in position to receive the load (again, not my words) having cut the time necessary to get there by a few good seconds. Did he unnecessarily damage the truck's articulation in the process? That thing is built to carry incredibly heavy loads, so with an empty bed, our guess would be "no."

Having driven one of these myself, I can tell you it was one of the best experiences behind a wheel I have ever had. It wasn't in an actual quarry or a digging site, but over a field. Still, there was plenty of uneven ground and even a few ditches to make the most of the experience, and it's definitely not one I will soon forget. It's nice to know you have an enjoyable safety net if automotive journalism fails. 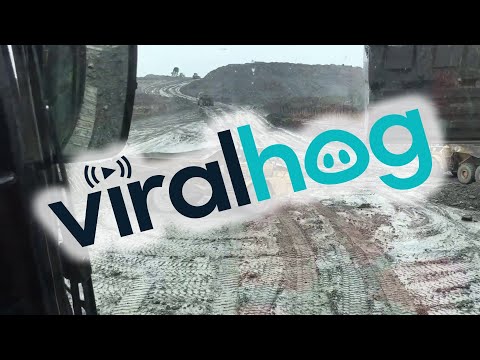