1 Dodge Has Selected Its Chief Donut Maker, You Can Watch How It Went Down

There’s something fascinating about watching a fast car race a fast motorcycle in a straight line. It’s almost as if we’re teasing ourselves while thinking that the car stands a chance, when in reality, the list of automobiles capable of defeating the world’s fastest sport bikes in a convincing manner, is extremely short.
8 photos

But hey, there are exceptions to the rule and when it comes to drag racing, sometimes “miracles” do happen, depending on how much money the driver invested in mods, or how well prepped the car is for a quarter-mile sprint, even when stock.

As far as this video is concerned, it shows multiple different cars and bikes, such as the Dodge Challenger SRT Hellcat, a C7 Corvette, a Chevy Camaro SS, a Honda CBR, a Yamaha and of course, the BMW S1000 RR. We’ll be focusing on the first race though, which kicks off around the 45-second mark.

In one corner we have the Challenger Hellcat, which is now the quintessential American muscle car – apologies to the Shelby GT500.

According to Dodge, the Challenger Hellcat will cover a quarter mile in under 11 seconds, or 10.85 seconds to be precise, but you’d need drag radials. Without sticky rubber, you’ll be somewhere in the 11-second range.

Luckily, this Hellkitty did feature drag radials and thanks to their massive grip, it managed to out-accelerate its opponent, a BMW S1000 RR sport bike, off the line.

In the end, the bike won this battle by a nose hair, crossing the line in 10.55 seconds, with the Challenger Hellcat posting a time of 10.88 seconds. Darn good race, wouldn't you say? 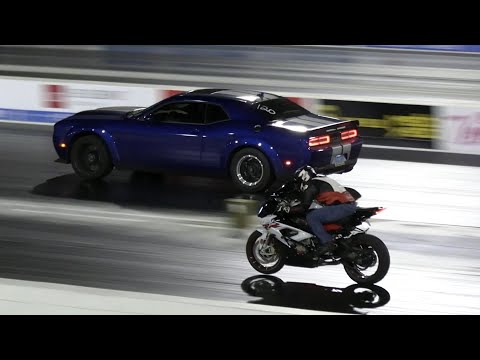