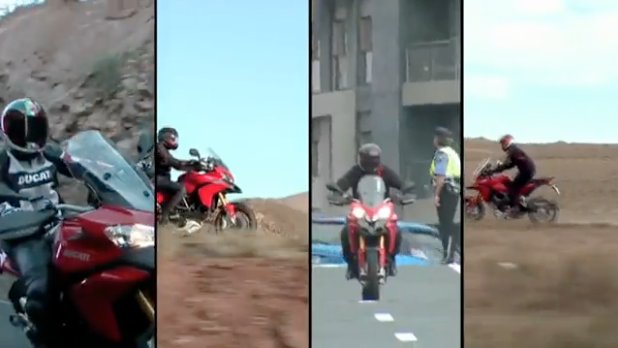 Ever since it was first introduced at the 2009 EICMA show in Milan, the four-bikes-in-one machine from Ducati created a mass hysteria among motorcycle enthusiasts. Now, the Italian manufacturer released a development and testing video of the Multistrada 1200 and also kicked off a television advertising campaign showing the bike's versatility.

As you can see in both videos, this motorcycle is able to offer four different riding modes including Sport, Touring, Urban and Enduro by just one click.

The design allows for instant adjustment to power and torque delivery in addition to electronic adjustment of suspension settings and traction control, allowing the rider to customize the Multistrada according to his needs and road conditions.

The power unit, Testastretta 11° engine, develops 150 horsepower and 119 Nm of torque, while the gearbox and final drive ratios have also been optimized to enable the use of a higher-ratio 6th gear.

Moreover, with a dry weight of just 189kg (417lb) the Multistrada 1200 is said to be lighter than any other road enduro, touring or sport touring bike currently available.

“When I was a child, they told me the world can’t change like this, by simply pushing a button. But you know what? They were wrong... Today, with just a click I can change the world whenever I want. The new Ducati Multistrada 1200... Endless transformations,” the voice featured on the advertising says.