Ducati Has a New-Found Love for White, the Multistrada 950 S Gets Pure Too

For one reason or another, there aren’t many white motorcycles out there, save of course for the occasional police bike and such. Overall, bike makers steer clear of white, but over the course of just two weeks, the Italians from Ducati released two new liveries based on this non-color.

The first one, called White Rosso, was introduced at the beginning of July for the Panigale V2, and now comes the second, GP White, meant for the new Multistrada 950 S.

Just like the V2, the Italian all-rounder will not be of course all white, but will mix it with grey and the Ducati Red to create an effect of “elegance, fluidity and balance of lines.” We don’t know about that, but we think it looks cool, and we don’t even like white all that much, especially considering how it was inspired by Ducati’s exploits in MotoGP.

Other than the addition of the new paint scheme, which should become available at dealers starting this month, there haven’t been that many changes made to the stock 950.

The bike is powered by the 937cc Testastretta 11 engine good for 113 hp and 96 Nm of torque– the unit will be Euro 5 compliant starting with the 2021 model year – and comes packed with features like electronic suspension, full-LED headlamp, 5-inch color TFT display, and Bosch ABS cornering.

The Multistrada line of V-twin motorcycles was born in the Italian stables in 2003 as a mostly road-going machine. Over the years, it had many incarnations, with the current offering counting 8 models, ranging from the entry-level 950 to the range topping 1260 Enduro. 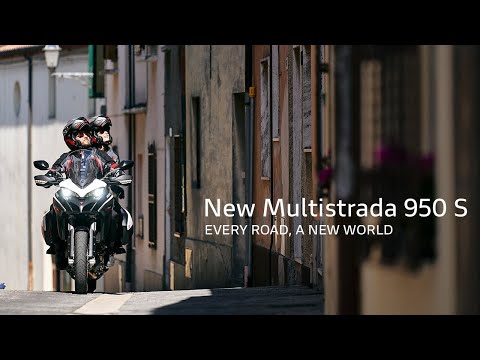