3 United Nude Takes a Break from Designing Shoes, Comes Up with This Gem

You’ve probably never heard of Dubuc Motors. That’s OK, that doesn’t really say anything bad about you, or about Dubuc Motors itself. Just because it’s been a discreet presence so far doesn’t mean it can’t come up with great things.
1 photo
The US/Canadian company with a logo we sincerely hope was a freebie (because it’s so blatantly similar to Bentley’s) wants us to believe it has created what’s possibly “the fastest sports car yet.” If we had a penny for all the times we’ve heard this claim, we’d have a significantly heavier piggy bank at home.

Dubuc Motors insists a lot on its North American origins, playing the patriotism card to good effect, as it managed to raise the planned $25 million through a crowdfunding campaign on the EngineStart website. The car itself is named Tomahawk, which some might think it’s just a missile used by the U.S. Navy, but others know it to be a throwing weapon from long before used by the natives.

The presentation clip feels like a little eulogy for a company that hasn’t proven anything so far, so even though everything they say about themselves might be true, right now it just sounds like big, empty words. That’s the kind of speech only a car maker with a minimum of 50 years behind can get away with. You can’t brag about the kind of company you are, when you haven’t put anything on the market yet.

Even less so when the car you say will “change everything we know about cars” (in itself a stupid claim, as it’s just an electric sports car, for God’s sake) looks as uninspiring as the Tomahawk. The 2+2 all-wheel-drive EV claims to have “American design,” but it has the kind of generic aspect you would expect to find in an image database under “futuristic sports car.” It’s both overdone and boring at the same time, which come to think of it, is really some achievement. Others might think differently, but we really can’t see the aesthetic appeal of this car.

The performance figures, on the other hand, those we can understand. The Tomahawk is said to reach 60 mph (97 km/h) in three seconds and have a top speed of 160 mph (257 km/h). The promised 300-mile (480 km) maximum range will most likely not be achieved while testing the performance mentioned above, but it still sounds quite appealing.

Dubuc Motors says production and commercialization will begin in 2017. The price for the Tomahawk hasn’t been revealed, but judging from the way the company is positioning itself, we’d expect it to be pretty prohibitive. Some sources claim a “below $100,000” price tag, but nothing has been confirmed yet. Stay close for more updates. 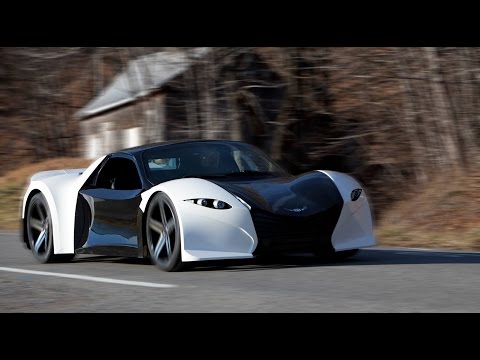