Dubai’s Mobile Police Station Is Not a Supercar, But Has What It Takes to Be Cool

We know everything about their sportcars, supercars and hypercars patrolling the tourists grounds of Dubai. It’s a perfect petrolhead line-up that never fails to impress. However, the Dubai Police Force is not all about the looks. They do care a lot about keeping things safe and sound.
1 photo
Since we love cars, we’re quite connected to everything the Dubai Police Force is doing. Whenever they add a new car to their fleet, there’s a little bird (best known as the internet) that alarms us. That’s the precise way we stumbled upon their latest high-tech addition, and we were surprised to realize it’s not a supercar. No Bugatti, no BMW i8, no burgundy Rolls-Royce.

We are, in fact, looking at a regular Toyota Coaster bus that has been customized with all the gizmos a high-tech Police car would need. Mind you, it’s not for catching the bad guys in high-speed chasing, but rather for what the Dubai Police calls “a mobile brainstorming platform.”

“The bus is designed to be a mobile brainstorming platform and it has all the latest technology needed and programs to make that possible. It is also an addition to the multiple ways people can submit suggestions,” Major General Al Obaidli said at a press conference late last year, announcing the new initiative.

According to Gulf News, the bus is scheduled to visit various Dubai Police stations and departments, government and non-government entities, as well as areas that draw members of the public in large numbers. The vehicle has seven seats, with three of them designed to swivel if needed. There are also foldable tables, electrical outlets, USB ports, and iPads. There is also a screen that will be used to play videos or conduct presentations.

You may think it’s not a big deal, but we find it a good example of how police forces should act in their approach to the community. 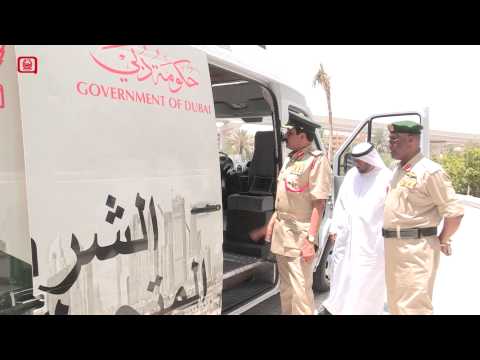