2 The Stig Is Tired of Supercars, Switches to Driving a 100 HP Sleeper Bumper Car

3 This Hoverbike Takes Us Closer To Future Personal Aircraft

4 This Guy Built a Hoverbike That Actually Works. Wait, It's Colin Furze

In all fairness, considering it already has McLarens, Bentleys, Bugattis, and all sorts of Mercedes-AMG models, the Dubai police force needs to equip itself with some pretty spectacular new vehicle if it wants to make the headlines.
6 photos

Once again, the law enforcers from the tiny Gulf state fail to disappoint. After slapping its livery on the fastest and most exotic vehicles available to the public, the Dubai police is now doing the same with the ones that aren't.

The idea of building a large enough drone to carry a human being is as old as the proliferation of the smaller, remote-controlled ones, but success has been limited so far. That probably has less to do with size and weight, but with the fact that unlike a camera or other loads, a human being won't sit still. And we all know how easy it is to off-balance these things.

The Russians at Hoversurf think they've done a good enough job of sorting this out, and the Dubai police force appears to agree with them. Autoblog, the publication reporting on this news doesn't say when exactly the hoverbikes will enter service, but it is a question of "when," not "if."

The specs of the Dubai-bound Scorpion-3 hoverbike are somewhat underwhelming, with almost all of them (apart from range) electronically limited for greater safety. It can lift to a maximum of five meters (16 feet) and travel at a speed of up to 70 km/h (43 mph) for 25 minutes before its battery needs a recharge.

It won't substitute the high-speed chase cars, but be used as a first-response unit in situations where a regular vehicle would take too long to reach - passing traffic jams, for example, which are a common occurrence there.

We haven't talked about safety yet, and that's because there isn't much to talk about. Hopefully, those exposed blades will get a protective cover of some sort, or this could easily turn into a 21st-century guillotine. As for the rider himself, he's wearing 12 kg (26-pounds) worth of protective equipment, but we don't think it will do them much good when falling from five meters (16 feet) at 70 km/h (43 mph). Not to mention they'd have to get past four spinning blades first. 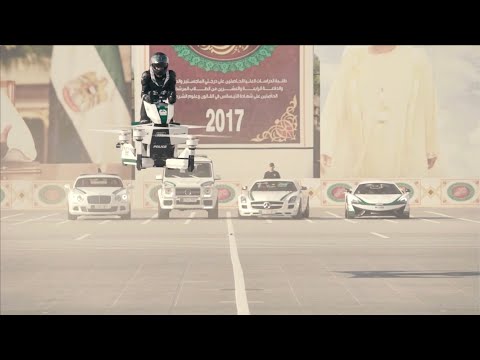