4 Martin Aircraft’s Jetpack Gets Listed on Australia’s Stock Market, Will Deliver in 2016

5 The Jetpack - Free Individual Flight
Car video reviews:
Up Next

Afraid of Heights, Motorcycles, Avalanches or Waterfalls? This Video Is Your Doom

Dubai Buys 20 Jetpacks for Its Firefighters

Dubai is serious when it comes to its first responders. Its special Police force has hypercars and exotics; its officers use Google Glasses to identify bad drivers and now, this. The city has become iconic for its skyscrapers and high-rise buildings with the world’s tallest building Burj Khalifa becoming a trademark. It’s mainly for these imposing structures that the Government just ordered 20 Martin Aircraft jetpacks.
18 photos

A while ago, Glenn Martin - the creator of the New Zealand-based company that is producing an innovative personal flying craft - announced his firm was listed on Australia’s stock market. It meant his patented jetpack he spent 30 years to develop would finally get the investment needed to get into production. 2016 is the planned year it will deliver the first units, and with Dubai’s announcement it’s been proved Martin's estimations are right.

Last year, Martin Aircraft said one full tank would keep the aircraft in the air for 30 minutes while the maximum commercial payload that the Jetpack can carry was 120 kg (264 lbs). The company did mention it would also retail different models created exactly for the kind of situations Dubai just asked for.

The deal was officially sealed the other day at the Dubai Air Show, and the ceremony was attended by Lt Col Expert Ali Hassan Almutawa, director of operations, on behalf of Major General Rashid Thani Al Matroushi, director-general of Civil Defence.

“Dubai is one of the fastest growing future cities in the world. With its modern skyscrapers and vast infrastructure, it has always been a global leader in adapting new technology to improve and save people’s lives. The introduction of Martin Jetpacks into our fleet of emergency response vehicles is another example of how Dubai leads the world,” said Almutawa.

Apparently, Dubai is planning to order more Jetpacks in the future, but for now it will settle with the 20 units and two simulators. Naturally, training services and operational support will also be provided by the New Zealand company. 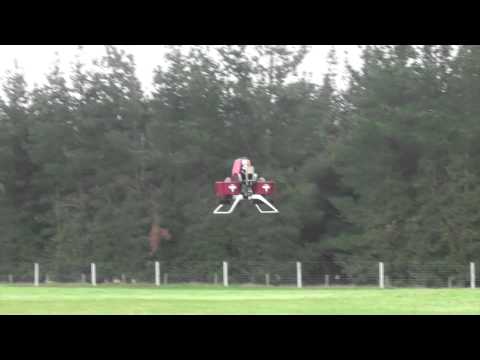