Changing times call for adjustment, but do we really need to reinvent the wheel? One British cyclist and entrepreneur is convinced that we do, but only so that it can be all-season, safer and more fun for us.

DryCycle Is the Rather Undecided e-Bike With (Some) Car Functionality

Meet DryCycle, which is exactly what its name sounds like. It’s a cycle that keeps you dry (and warm) and that hopes to make cycling a much more fun and comfortable experience, whether on the daily commute around the city or on short weekend treks outside of it. Cycling to work or bikepacking at the weekend doesn’t have to mean riding exposed to the elements.

The first prototype for DryCycle was shown to the public in 2019, with the finished product, the one that is ready to ship as soon as you’re ready to make the (financial) commitment, introduced in early 2021. DryCycle is an EAPC, an Electrically Assisted Pedal Cycle that claims to bring all the advantages of an e-bike with some of the functionality of a car. It’s not meant as a replacement for the latter in the long run, but it could substitute it in some occasions.

Technically, DryCyle is a fully enclosed four-wheel cycle that sticks to current UK and EU regulations, which means it’s electrically assisted up to only 25 kph (15.5 mph) and has no actual torque option. You do have a switch that allows the cycle to roll on its own, without you pedaling, but it only goes as fast as 6 kph (3.7 mph), and it serves the purpose of helping you move easily from a standstill position.

Power comes from an E8000 Shimano motor with 80Nm of torque and peak continuous power of 250W. The motor is powered by a dual battery pack (504Wh each, also Shimano), with an ancillary 870Wh battery powering the electronics: lights and horn, heater and windscreen wiper, that kind of stuff. Combined range is 50 miles (80.4 km) at the highest level of pedal assist, but you also get an 11-speed Shimano cassette for smoother pedaling on your part. And you always have the option of extending the range by carrying extra batteries in the cargo area behind the seat.

This is where similarities with an e-bike stop. Otherwise, the DryCyle is more like a car, a concept that has been explored before by other projects like the LEF or the CityQ Car-eBike. What these have in common is the assumption that regular cyclists would continue riding in bad weather if they had some sort of protection, and that casual cyclists would do it too if the degree of comfort were heightened.

DryCycle does that by adding a body to the cycle. Inside the cabin, or better said, under the canopy, you get a racing seat and a semi-reclined pedaling position, joysticks to control the turns, a heater and fans (but no AC), lights, optional heated handlebars and heated seat, and the promise of carefree ownership. Because it is still legally an e-bike, DryCycle doesn’t require a permit or license to operate, and you don’t have to worry about taxes, registration and parking fees.

Moreover, you can ride it both on the street and on bicycle paths, though your former pals in spandex might not appreciate you doing either. Drivers won’t like it all that much, either: the DryCycle is as wide as a motorcycle, but as the Global Cycling Network review below shows, it will hold back traffic on narrow, one-lane roads.

Designed by cyclist and engineer Andy Murphy, the DryCycle was designed to be more reliable in case of a crash than a bicycle. The production version comes with extensive crash testing at Millbrook Proving Grounds, particularly for front and side impacts at speeds of up to 31 mph (19.2 kph). It has a roll cage and crumple zones that minimize the risk of head injury in case of collision.

The polycarbonate body is both lightweight and durable, so the entire contraption weighs just 120 kg (264.5 pounds). Total payload is also 120 kg (264.5 pounds), which means it can carry the single rider and some cargo in the back, behind the foldable seat. Though there is some room back there, the makers discourage using a child seat or a trailer, like you would with a two-wheel e-bike. Similarly, if you wish to ride with your significant other or a passenger on the regular, it’s best to get a second DryCycle – a seemingly harmless statement until you hear how much it costs. More on that later.

Riding on Schwalbe Marathon Plus 47-406 (20 x 1.75) tires with puncture resistance, the DryCycle can be parked anywhere you’re allowed to park, as long as you don’t take the space of a car in a paid parking lot. You can also flip it on its rear end into a standing position (maintenance position) and tie it down, to occupy even less space.

The DryCycle wants to “replace your gym membership” because it helps you “burn fat, not fossil fuels.” It wants to be there for the daily commute or day trips out and about at the weekend, but it would also make sense as part of a fleet for sightseeing, given how it’s allowed into city centers where gasoline cars have been banned.

In fact, considering the price of one such cycle, a fleet service makes sense. The DryCycle costs £14,995 before extra options and delivery; that’s $20,832 at the current exchange rate. That’s a lot of money for an e-bike with four wheels and an enclosed cabin, it's real-car-kind of money. You won't get the same looks from passers-by, but at least you'll be able to bring someone along for the ride. 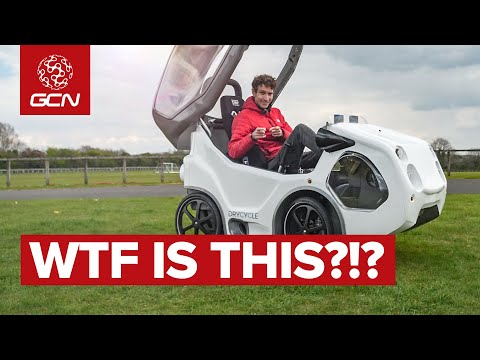