2 Go to War on Overgrown Grass With the Tank Lawn Mower, Has Working Cannon

3 World’s Only Stretched Tracked Vehicle, the Tank Limo, Is How You Do Prom Right

We’ve seen this spin on the old “taking this ride for a joyride” tale before, but not with such a spectacular, movie-like outcome: a pair of Russian soldiers, reportedly drunk, took a BMP-3 infantry fighting vehicle through a cement wall at the Volgograd International Airport.
1 photo
The incident occurred on October 20 and was captured by the security cameras at the airport. After it emerged on social media, along with photos purporting to be of the “drunk” operator who caused the damage, Russia’s Ministry of Defense confirmed the incident. They did not, however, say whether the two soldiers inside the BMP-3 were drunk or not.

The Daily Mail notes that smashing through the cement fence at the Volgograd Airport, which is also known as Gumrak Airfield, wasn’t the craziest part of the joyride. Taking the vehicle to the public road at 55 mph (88.5 kph), scaring the bejesus out of everyone was. One railway worker is quoted as saying that the BMP-3 was “flying,” while another describes the noise it made as that of “a plane falling out of the sky.”

The same media outlet identifies Corporal Alexander Zherebtsov, 29, as the operator, with conscript private Dmitry Niroznesko as passenger. Zherebtsov is the man shown in handcuffs in the tweet below, in a shot taken after the incident.

Despite the video showing the armored vehicle deliberately going through the wall, the Russian Ministry of Defense makes it sound as if the whole thing was an accident. “When a military convoy was moving along the road along the Gumrak airport, the driver of one of the armored vehicles lost control,” reads the official statement. The operator “allowed it to run over the outer fence of the airport. Nobody was injured in the accident.”

That last part is the silver lining. The BMP-3 vehicle was reportedly damaged badly. 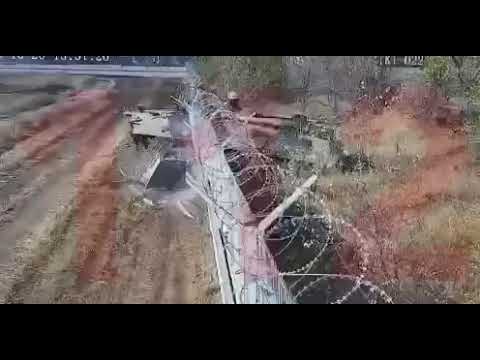 Photos of the driver and the wall after the incident. 2/https://t.co/ewaiTuBCCE pic.twitter.com/xr30a9VNSk