1 LiDAR-Packed Elios 3 Mapping Drone Knows How to Take a Hit, Gets Back Up After a Collision

2 Large, Civilian Drone Takes Off for the First Time From an International Airport in Alaska

As useful as drones have proved to be, most of them still have their limitations and one of the most frustrating ones is their inability to cope with challenging weather conditions. A team of engineers from Caltech wants to change that.
6 photos

If we want to be able to rely on autonomous flying vehicles to take over some of our daily activities, we have to improve their technology to make them more weather-proof. Right now, drones aren’t exactly designed to fly in heavy winds, but what if we teach them to learn from their previous experience and adapt to new conditions on the fly? That’s exactly what Caltech engineers are working on right now, developing the so-called Neural-Fly. It is a deep-learning method that helps drones cope with unknown weather conditions in real-time, by updating some key parameters.

What the Neural-Fly neural network does is teach the drone how to survive strong winds using AI (artificial intelligence) and machine learning. First, scientists collected 12 minutes of data in various wind conditions, building a model based on six different wind speeds. Building on that information, the drones equipped with the Neural-Fly (implemented in an onboard Raspberry Pi4 computer the size of a credit card) learned how to respond to strong winds. As explained by Caltech, “an adaptive controller provides real-time learning of wind-specific coefficients of the learned model.”

Engineers tested their method at different wind speeds of up to 27 mph (43.4 kph), including in a wind tunnel, and proved that Neural-Fly works even in changing winds, with the drones still being able to follow a flight path precisely. It is just as reliable when it comes to landing the drone, too, learning in real-time and being able to respond to changes in the wind as they go.

The research was funded by DARPA (Defense Advanced Research Projects Agency) and Raytheon. While we have no information so far on Caltech’s next plans regarding its Neural-Fly, if implemented, it could significantly improve industry segments that use drones, such as deliveries and remote exploration. 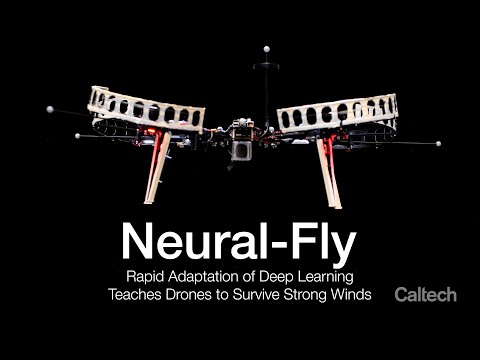