1 This Drone Will Drop into Water and Sink on Purpose

2 This Norwegian Composite Drone Is the New Weightlifting World Champion

Droneboarding Might Become a Thing, but Not before This Kid Has Kids of His Own

Vlad Mitrache
People are definitely trying to get the most out of their drones, and it’s leading to some very unexpected results. After the fire-breathing copter we’ve seen torching a turkey on Thanksgiving and the record-breaking monster capable of lifting a man’s weight, now this comes along.
1 photo
People are getting lazy, that’s for sure, and are looking for ways to make their lives easier. That’s why they’d immediately embrace the idea of a drone that could walk their dog or pull their kids’ sleigh for them. And then they’d still get upset when robots take over. Well, guess what, when we sit around and do nothing, it doesn’t take much of an AI to figure out we’re useless.

However, the robotic army will need a much stronger drone if it’s to stand a chance of conquering Earth, regardless of how soft we’ve become. This toddler you see here is probably weighing as much as the equipment he’s wearing, and yet the drone is struggling to break the friction between his board and the snow.

Once that’s taken care of, it’s time to accelerate. OK, you can accelerate now. Come on. Oh, is that all you can do? Yawn. Even the kid looks bored. On the other hand, he does have a Red Bull helmet, so maybe he’s a pro. He makes this look easy.

All jokes aside, the man who had this idea (we’ll assume it’s the father) deserves full marks for his initiative, but the result is remarkable only for the novelty factor. Other than that, we’re still quite a few years away from when kites will be replaced by drones, and people will be able to glide on snowboards, surfboards and any other type of boards just as fast on less windy days as well.

As things stand right now, unless you hook yourself to a Predator drone, you’re going to have a hard time finding something that can pull you at a convincing speed. Build a cluster of drones, however, and things could change. You’d be going slightly faster, but that might only be down to all the money that flew right out of your pocket. 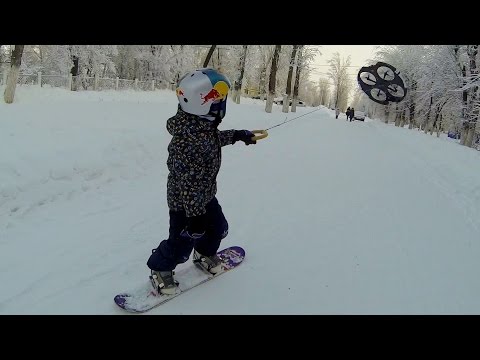