2 Video Breakdown of Robocar Components Ahead of Historic Goodwood Run

4 Roborace - Racing with No Driver

5 Robocar Made Its Debut at This Weekend's Formula E Race in Paris
Car video reviews:
Up Next

Drone Footage Shows Where Robocars Are Made

Back in July, a unique event took place on the Hillclimb of the Goodwood Festival of Speed: the successful first ever run of an autonomous car in such a competition.
1 photo
Sure, the 1.16-mile track up a 304 feet (92.7 meters) hill can barely qualify as a hill climb – Pikes Peak, for instance, takes competitors to 4,720 feet (1,440 meters) – but the feat remains nonetheless.

As the company behind the car is still struggling to make the racing series for autonomous cars a reality, it keeps on releasing info about the hows and whys of the Robocar, as a means to show the world how determined to see this thing through it really is.

Robocars, as well as the test mules called DevBots, are being assembled at a facility in Banbury, north of London.

For the first time, the company gave the world a taste of the facility where the cars are being designed and built, by means of a short video shot with a mini-drone.

You can see how the 45,000 sq ft former F1 facility has been reshaped to accommodate Roborace in the video attached below.

The Robocar is 4.8 meters long and 2 meters wide. It has no cockpit and weighs only 1,000 kg. Four electric motors, each developing 300kW, are used to turn the wheels, and a 540kW battery provides the electricity.

With this hardware and its 1,200 Nm of torque, the machine is supposed to be capable of reaching a top speed of 322 kph.

The brain of the car is a pair of Nvidia Drive PX2 artificial intelligence platforms. The two use 15 ultrasonic sensors, six cameras, five LIDAR and two radar systems to determine the car’s position and decide on the course to follow.

Initially, the first race in the Roborace series should have taken place during the 2016-2017 Formula E season, but at the time the idea fell through. 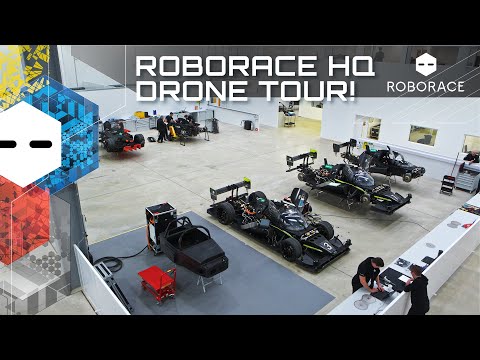