1 Copenhagen Gets 400 BMW i3 EVs to Improve Interconnected Mobility

5 Mr. Bean Goes Green with New BMW i3 after Selling His McLaren F1
Car video reviews:
Up Next

This little game wasn't meant to test the driver's nerves of steel or the car's safety system and crash worthiness, but to see just how effective the throttle-lift regenerative braking effect in the BMW i3 really is. And just to make it perfectly clear, the car HAD actual working brakes.
1 photo
Somebody thought it would be fun to devise a challenge which saw two drivers cruise through downtown London without hitting the brake pedal. As long as the situation allowed it, of course.

The two are Mat Watson and Rebecca Chaplin, Auto Express journalist who clearly enjoy the occasional thrills and don't shy away from a friendly contest.

And so they set off from the office building's parking lot and entered the congested central London Traffic. Here, you can't speak of a specific rush hour, as there aren't any other types of hours as a reference.

Mat is the first to take the wheel and he seems to be quite comfortable, that is if you ignore all the girly gigglings and screaming and the loose use of the horn. He even finds time for an imaginary drag race with a Mercedes-Benz S-Class after the red traffic lights were narrowly avoided.

After changing lanes with a maneuvre that would put to shame a Baghdadi taxi driver, Mat finally pulls over and engages the parking brake while the car was still creeping forward. Right. Times he hit the braking pedal? None."Get out of the way, woman!"
It's Rebecca's turn and she immediately comes off as being the more nervous of the two. She has every right to be, though: she's never driven the i3 before and this system deceleration by lifting off the throttle requires a bit of getting used to. After you do, though, it becomes second nature and you start wondering why don't all cars have it.

She's very competitive, though, so with pedestrians crossing the road left and right, she dishes them a light dose of girly abuse: "get out of the way, woman!" Mat is being really helpful with some good tips, but he also leaves the impression he's in for the win, putting some unnecessary pressure on Rebecca: "the space you left is enough to really annoy the people behind you." Oh, no worries, it's just a HUGE BUS.

And then comes the first actual brake. Thinking about how she was going to have to stop for a ticket when entering the car park, Rebecca loses her focus and is taken by surprise by a set of traffic lights. More giggling from Mat ensues. With the pressure off, he begins to outright cheat by rocking back and forth into his seat, causing the car to move forward and making Rebecca brake for the second time.

Back at the car park, Mat is proven right. The downward sloped ramp combined with the time taken to dispense the ticket makes Rebecca choose between braking or having her arm torn off. She opts for maintaining her body's integrity, so the little challenge ends with the score of 0-3. She's up for a rematch, though: "I deffinitely think that if we did it again, I could beat you. Or at least match your score." Mat, on the other hand...: "Yeah, we're not going to do it again." 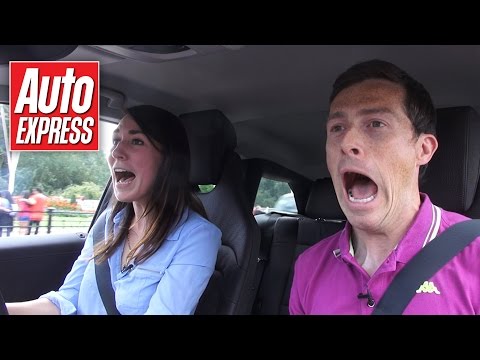